"Personally, I always find my comments and observations most interesting. You haven't truly lived until you have seen the world through the eyes of madness. Why, half the time I don't know if what I see is what's really there, or what I wish was there ... or what I pray, I beg, I plead is not."
— Vezon, Federation of Fear

I'm so sorry if I make typos. Usually, I make edits without checking which is annoying, and I'm tying to stop it... and I think I'm on the right way.

I've become a fan in 2004 - when I got my first set, a Bordakh, and saw the Mask of Light - and got interested in the comics and the story in 2006. After I watched the 1st movie my fav. character became Tahu, and Makuta, but after the years my overall fav. character became Kopaka, and 2nds are Tahu & Makuta. I can remember how amazed was I by the movie and it got me watching it over and over again. Now, after 14 years, I can see its mistakes, but with the eyes of a 7 years old child it was beautiful and amazing.

"I work alone."
— Kopaka, The Coming of the Toa

"I've made a lot of fool-mistakes lately, Vakama. That's what happens when you're brave-tough enough to make decisions."
— Matau, Web of Shadows

"We all make mistakes, Vakama. That's what happens when you're brave enough to make decisions."
— Matau, Web of Shadows

(I do like both versions, but I prefer the one from the book) 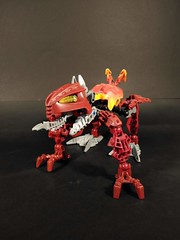