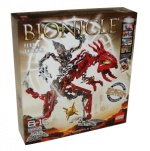 The set contains 148 pieces. 19 of these are used to build Fero, with the remaining 129 being used for Skirmix.

The set can be combined with 8979 Malum to create a Sand Stalker.

Fero wields a Thornax Launcher and can be attached to Skirmix's back with a red axle. Fero shares Skirmix's "life counter" in the BIONICLE Action Figure Game. In the game, his life counter is reduced by two life points if Fero rather than Skirmix is struck by an opponent's Thornax.