Months later, the Bahrag were approached by the Toa Nuva, who had realized that the cleansing of Mata Nui was vital to the survival of the universe. Using their elemental powers, they broke the seal containing the queens. After a brief conversation, the Bahrag sent a signal to the Bohrok, awakening the swarms once more. From there, they continued their appointed task, clearing the island of Mata Nui. Though they encountered unexpected resistance from Kardas, the Bohrok swarms eventually overcame all obstacles and completed their job. 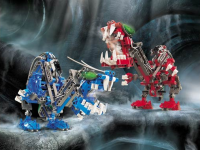