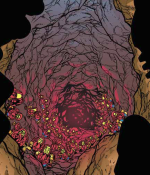 Tahnok Va emerging from a Bohrok Nest on Mata Nui

The Tahnok Va were created by the Great Beings to assist the Tahnok in clearing Mata Nui, reverting it to its original status as a barren wasteland. Upon creation, the Va were placed in hibernation along with the other Bohrok, waiting for the time to be awakened to perform their duty.

After Makuta Teridax was defeated by the Toa Mata, he unleashed the swarms to impede their progress. The Tahnok Va awoke, and began aiding the Tahnok in their attempts to level the island, providing Krana to Tahnok that had lost them to the Toa.

Gali encountered a swarm of Tahnok with their Va companions while traversing the domain of Le-Wahi. Though she managed to incapacitate several, they eventually recovered with the help of the Va and continued on to Po-Wahi. She followed them to Po-Koro, where they were fended off through the combined efforts of herself, Pohatu, Onua and Kopaka. Kopaka later trailed another swarm of Tahnok and Tahnok Va to the slopes of Mount Ihu. He was about to leave to check on Tahu, but discovered a Tahnok Va wandering off. Following the creature, he was eventually led to one of the Bohrok Nests, where the creature was collecting more Krana to assist the swarm.

Following the defeat and capture of the Bahrag, the Tahnok Va were rendered seemingly inert, no longer having any direction from the Bahrag. Once the Kal were released, however, the Va were quick to assist them, tricking the Toa Nuva into believing they were still siding with them until the last possible moment. Lewa encountered a Tahnok Va traveling through the jungle, but the creature lied to him, claiming nothing was wrong.

The Tahnok Va, and other Bohrok eventually received a signal that it was time to return to the nest. They returned to the nest and resumed their hibernation, eager for the Bahrag to be set free. Once the Bohrok Kal failed to defeat the Toa Nuva and release the Bahrag, however, the Bohrok swarms remained dormant, sleeping inside the nests.

When the Bahrag were released by the Toa Nuva, the Tahnok Va awoke and contributed to the cleansing the island of Mata Nui. They have since returned to their nest to sleep.

Tahnok Va are known for their speed and recklessness. They are often seen running across narrow ledges at extremely fast speeds.

Tahnok Va carry Firestaffs, which they use to see their way through dark areas, as well as to defend themselves. Tahnok Va would usually carry dormant Tahnok Krana, so that they could supply the Tahnok with new Krana.

8554 Tahnok Va was a small set released in the Spring of 2002 along with the other five Bohrok Va. It contained twenty-seven pieces, including a yellow Krana, the dormant Krana of Tahnok in one of the eight possible Krana shapes. Pressing on its left arm causes the Krana on its back to fling forward. 1431 Tahnok Va was a reissue of the same set. It was identical except for the packaging and was released in Japan in 2003 as a promotion with the Kabaya Foods Corporation.

The pieces from Tahnok Va can be joined together with pieces from 8553 Pahrak Va to make an Infernavika model, or with 8552 Lehvak Va to build a Pokawi.