The Lehvak Va were created by the Great Beings to assist the Lehvak in clearing Mata Nui, reverting it to its original status as a barren wasteland. Upon creation, the Va were placed in hibernation along with the other Bohrok, waiting for the time to be awakened to perform their duty.

After Makuta Teridax was defeated by the Toa Mata, he unleashed the swarms to give him time to recover. The Lehvak Va awoke, and began aiding the Lehvak in their attempts to level the island, providing Krana to Lehvak that had lost them to the Toa.

Primarily focusing on Le-Koro and Le-Wahi, the Lehvak Va helped the Lehvak clear the swamp by providing spare Krana to those that had lost theirs. When the Bohrok reached the village they began tearing it down, and, meeting opposition, enslaved the Le-Matoran with Krana. As their Turaga, Matau, was also enslaved, the only free Matoran that remained were Kongu and Tamaru, who eventually freed their brothers.

Soon, the Toa Nuva defeated the Bohrok-Kal, and the Lehvak Va, along with the other Bohrok, returned to their nests to sleep, awaiting the time when they would truly be needed for their duty. The Toa Nuva, who were preparing the universe for Mata Nui's awakening, returned to the now-deserted island of Mata Nui and awakened the Bohrok swarms. The Bohrok proceeded in cleaning Mata Nui, and met opposition with the newly arrived Kardas. After defeating the creature, despite heavy losses, the Bohrok and Bohrok Va succeeded in leveling the island and then returned to their slumber.

Lehvak Va are particularly noisy, and their wailing and whooping cries drown out other sounds. Never traveling far from a Lehvak squad, they travel easily between the mud, water, and trees of Le-Wahi.

Lehvak Va are equipped with small Katana used to cut through dense jungle growth as they scout. 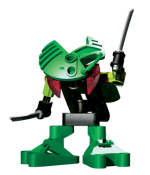 8552 Lehvak Va was released in the Spring of 2002 along with the other five Bohrok Va. It contained twenty-eight pieces. The set included a gray Krana, the dormant Krana of Lehvak. Pressing on its left arm would fling the Krana out of the holder on its back.

An identical set, 1434 Lehvak Va, was released in Japan in 2003 as a promotion for the Kabaya Foods Corporation.

In the non-canonical The Coming of the Bohrok booklet included with BIONICLE: Bohrok Swarm, the Lehvak Va's Katana are referred to as Twin Blades.