"That 'monster' was the last of the beings that lived in that city."
— Spectral Mask, Journey of Takanuva

The "City-Building Creatures" are sapient beings that live exclusively in the City of Silver Pocket Dimension.

A creature fighting the invading Kestora

In a pocket dimension, the City-Building Creatures built a grand city of silver and crystal towers, where they lived and prospered for a long time. However, Kestora attacked and took their city as their own, leaving only one surviving inhabitant.

This particular creature fought off the Kestora for a while, and continued to live in the city. However, when Takanuva reached this area, he mistook the beast for a Rahi attacking the Kestora, and he fought off the creature. At this point the Kestora entered the city and shut both of them out.

Later on, Takanuva came to realize his mistake, and befriended the creature. He lured the invaders out with a show of his Light powers as the creature burrowed into the city and locked out the invaders.[1] 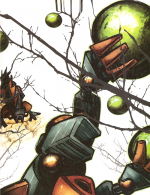 This species is about twenty feet (6 meters) tall and is herbivorous, feeding on large green melon-like fruit. They are gentle by nature and will only use their formidable claws in self-defense.[1]