"Tarix is a leader, too. He doesn't waste time worrying why the Skrall have suddenly decided to attack -- he acts."
— Narrator, The Fall of Atero

Tarix is an honorable Glatorian of the Water Tribe.

On Spherus Magna, Tarix lived under the governance of the Element Lord of Water. During the Core War, Tarix led an entire battalion of the Water Tribe army. He once clashed with Ackar and his Fire Tribe troops in the Field of Mist, seized control of an Ice Tribe fortress, and led the charge at Lein's Drift.[1]

After Certavus's platoon was attacked by Skrall, the Water Tribe sent Tarix to take advantage of the Ice Tribe's absence of power, though he disagreed with the strategy. They came into conflict with a Jungle Tribe unit, Tarix then offered an alliance to them, Vastus, commander of the unit, agreed. Tarix explained that the Element Lord of Ice had allegedly created a secret tunnel, and they needed to get there before the Ice Tribe realized the information had leaked. They passed an army led by Malum in the Great Jungle and hid, though the Fire Tribe warriors started a fire after sensing their presence. They reached the site, but were followed by Malum's forces. Vastus grabbed a Water Blade and blasted Malum, giving it back to Tarix and retreating with his unit. Malum went to attack Tarix but Tarix called his warriors to attack, and the Water Tribe charged the Fire Tribe. Tarix took on Malum, but was struck in the shoulder with an arrow by Certavus, whose Ice Tribe platoon was on a hilltop. The Fire Tribe moved back into the forest and the Ice Tribe left soon after, and Tarix made the decision to stop the mission. He was officially rebuked, but his career survived.[2]

Just prior to the Shattering, Tarix was leading a patrol into the desert of Bara Magna, and when the cataclysm occurred, they were stranded there. Many troops died before finding refuge, but Tarix, Kiina, and a few others made it to the village of Tajun.

After the disaster, Tarix helped design the new social system along with Certavus, Ackar, and Vastus, and he was appointed as the Prime Glatorian of the village of Tajun. Many veterans spoke out against the system, and in response, Tarix wrote the Glatorian Creed, which fully explained the need for the system, and detailed the rules of combat.[3]

From the beginning, Tarix remained firmly in the top four Glatorian, but he did not win any championships in the first few thousand years. Following Certavus' death, Tarix, Ackar, and Vastus became the best in their field, and were always fighting for the title in Arena Magna. Tarix eventually set the record for consecutive Great Tournament victories, winning the championship ninety-three times in a row.[3]

100,000 years after the Glatorian system's creation, Tarix had won over 1,000 matches. He was the victor of the Great Tournament a year ago, and was the last declared champion.[4] 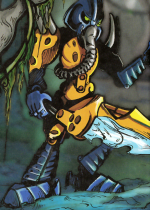 Tarix in the arena at Tesara

While in Tesara, Tarix engaged in a friendly practice match with the Glatorian Gresh. Gresh lost the fight, as he was relying heavily on moves he had used in the past. Tarix pointed out this weakness in Gresh, who became set on finding better moves.[5]

When Gresh was asked by Tesara to do battle with a Skrall over a debated oasis, he agreed and began journeying to Vulcanus with Strakk and Tarix. On their way they found the Agori Berix, being attacked by the Bone Hunter Fero. They eventually forced the Bone Hunter to retreat, and continued on their journey with the Agori, but were again attacked by a pack of Vorox. The group was able to fend them off until they finally retreated. Berix noticed a figure in the distance, and Tarix realized that it was the exiled Glatorian Malum. Finally reaching Vulcanus, Tarix and Strakk watched from the sidelines as Gresh was defeated by the Rock Tribe's Skrall. Before the Skrall could deliver a killing blow, Tarix intervened, saving Gresh's life. Tarix warned the Skrall of the repercussions of his actions, forcing the Skrall to leave. Venturing out into the desert later that night, Tarix discovered Berix, and began conversing with the Agori.[6]

Tajun soon found its name slandered by accusations that their repaired artifacts were stolen. A representative of Raanu, who had come to ask for the Glatorian's help, was told to find an Ancient Spear that would clear the village's good name. After succeeding, Tarix pledged his help to Vulcanus in defending it against the raids by the Bone Hunters, giving the Agori his seal.[7]

War with the Skrall

Tarix, Strakk, and Gresh later traveled to Atero in order to participate in the Great Tournament. During a practice match with Strakk which the Water Glatorian won, Tarix noted the absence of the Skrall, who would normally defeat them in battle, and his wish to return to Tajun, which had been raided by Bone Hunters. The next day, Tarix was paired with Strakk as part of the first round of the tournament, and fought with the Ice Tribe warrior. Their bout was interrupted by Raanu, who informed them of the approaching Skrall army. Tarix, marshaling Strakk and Gresh, went to meet the army. In the battle that ensued, Tarix and his allies managed to temporarily hold off the invasion, but were eventually forced to retreat. Tarix rounded up the remaining Agori, and fled the Arena Magna. Regrouping with his allies, Tarix pledged to defeat the Skrall and made plans to recruit help.[8]

Tajun sent Kiina and Tarix out into the wastelands near the village to search for a reported herd of Rock Steeds. The two discovered the corpses of two Vulcanus trainees, and noticed signs of Bone Hunter activity around the bodies. Tarix, intending to bury the Glatorian at Tajun, noted that one of the two Water Tribe fighters would need to inform Raanu. Kiina offered to go, leaving Tarix to defend the village.

Tarix was later approached by the Glatorian, who believed that the village of Vulcanus, which had been attacked by Bone Hunters who had been driven off, was still in danger, despite being dismissed by Raanu. The group returned to Vulcanus, and arrived in the midst of a raid. The Bone Hunters were eventually defeated, and the survivors retreated.[9]

Tarix was contracted to fight Vastus for a food source the Water Tribe had a stake in. He traveled to Tesara to do battle with the Jungle fighter. In the midst of the fight, Ackar and his Glatorian allies arrived, asking for the fight to stop. Ignoring the jeers from the crowd, Tarix willingly halted the fight, to listen to the Fire Tribe warrior. Kiina informed Tarix of the destruction of their village, to Tarix's dismay. Ackar requested Tarix to give his weapon to Mata Nui, which he would upgrade to help them fend off the allied Bone Hunters and Skrall. With encouragement from Vastus, Tarix gave his weapon to Mata Nui, who used the Kanohi Ignika to transform the tool and imbue Tarix with the power to control Water. Tarix's support of Mata Nui was enough to convince the Agori to believe in his plan.[10]

Ackar began training the Glatorian, and attempted to teach them a powerful blocking technique, which could defend against a Certavus-based attack move. Tarix was able to successfully replicate the move, but admitted that it would take years of practice to try and master it.[11]

The veteran Water Tribe fighter later joined the final battle at Roxtus, using his new powers and his honed fighting skills to help defeat the army of Skrall and Bone Hunters. Tarix then assisted in the construction of the single, unified city. After the villages united, he joined the defense force under the leadership of Ackar.

When Teridax arrived on Bara Magna in Mata Nui's original body, Mata Nui refused to join him and began fighting Teridax using his new body. As per Gresh's plan, Tarix and the other Glatorian fired Thornax fruit at the larger robot in an attempt to penetrate it and distract Teridax. However, unperturbed by their efforts, Teridax released an army of Rahkshi of Heat Vision to deal with the Glatorian.

The Glatorian were relieved from battle with the Rahkshi with aid from Tahu using the Golden Armor, which defeated the Rahkshi. Mata Nui was then able to complete his mission of reforming Spherus Magna from Bara Magna, Bota Magna and Aqua Magna, allowing the Glatorian and Agori to live with fewer troubles as he revitalized the planet, creating a paradisiacal world.[12]

Tarix in the arena

Tarix respects the traditions of Bara Magna and is highly regarded by Agori and Glatorian alike. His numerous battles have shaped him into a wise and experienced warrior. He was regarded as a fierce competitor in the arena, but is known to also be very fair. His nobility earned him the respect of much of Bara Magna, and he gets along well with many of the Agori and Glatorian.

With the assistance of Mata Nui, Tarix was given the Element of Water, which he can channel through his tools.

Tarix wields a pair of Water Blades, with a Thornax Launcher attached to one of them. 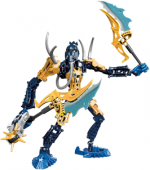 8981 Tarix was released as one of six Glatorian canister sets in early 2009. The set contains 57 pieces, among them a Thornax fruit and a "life counter" piece on his back, which indicates Tarix's health in the BIONICLE Action Figure Game. Both Tarix and his canister are used in the game.

"The secret to being a winner is already knowing the mistakes losers make... and not making them yourself."
— Tarix, BIONICLE.com

"I fight with intelligence and elegance."
— Tarix, BIONICLE.com

"No, Gresh, I don't think we can stop them... I only know we have to. But we sure could use some help -- the kind of help that carries a sword."
— Tarix, The Fall of Atero