"The spiky Thornax plants are rare, but the Vorox crack them open and make stew out of them. It's completely idiotic, of course, since the Thornax can explode when the outer shell is ruptured."
— Atakus, Glatorian Arena

Thornax is a variety of fruit grown from rare plants native to the Bara Magna region of Spherus Magna.

Thornax plants grew in the deserts of Bara Magna.[1] The Thornax plants managed to survive the Shattering due to their ability to thrive in harsh environments.[citation needed] They eventually came to be used in Arena Matches as a weapon, and their valuable nature as ammunition became a source of conflict for the inhabitants of Bara Magna. The use of over-ripe Thornax were frowned upon in normal fights due to their explosive power, and were mostly used in the Arena Magna during Great Tournament fights.[BIONICLE.com] Bone Hunters were also known to use them as weapons.

Artificial Thornax loaded into wall-mounted launchers were used in the defenses of the Valley of the Maze.[2]

When ripe, Thornax have fully developed spines and become rock-hard. Thornax in this form are used mostly as ammunition for the Thornax Launcher weapons carried by Glatorian, Bone Hunters, and others. When Thornax are allowed to become over-ripe from the heat of the desert, they will become unpredictably explosive. Unripe Thornax are green.[BIONICLE.com]

The nectar inside Thornax can also be extracted to be used as ink for writing.[citation needed]

When unripe, Thornax may be softened by boiling them and were used as an ingredient in a type of stew eaten by both the Bone Hunters and the Sand Tribe. The stew was known for its revolting smell, rubbery consistency, and awful taste. It is viewed with aversion by most Agori, who consider Thornax stew even worse when served cold.[3] 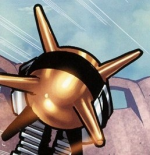 A Thornax in the Comics

The Thornax was released in every set that contains a Thornax Launcher in 2009, to be used as ammunition for it. It is made of a golden, rubbery plastic, save for a black hard plastic band around the center, where the fruit is held by the tines of the Thornax Launcher. In the "BIONICLE Action Figure Game", the Thornax, when launched, reduces the number on a foe Glatorian set's life counter by two for each hit, and where the Thornax lands shows where to move the Glatorian set that launched it.

A Thornax being fired in The Legend Reborn