Fero is a member of the nomadic, thieving tribe of Bone Hunters.

Fero fought and defeated the Rock Steed Skirmix, gaining the creature's loyalty. Skirmix became his companion, and accompanied him throughout the deserts.[citation needed]

While riding Skirmix in the desert, Fero spotted Berix and chased the Agori, attempting to capture him. Just as he was about to catch the villager, he was stopped by Gresh, who, along with his allies Tarix and Strakk, attacked the Bone Hunter in an attempt to defend Berix. Fero eventually retreated from the fight, trampling Strakk with Skirmix in the process.[2]

After a failed raid on the village of Vulcanus, Fero began tracking down the two Glatorian that thwarted his efforts, Strakk and Gresh. He tracked them during their attempt to deliver Exsidian to Vulcanus, but was prevented from enacting his revenge when the Skrall arrived. The Glatorian struggles with the Skrall triggered a rockslide, burying the Glatorian. Fero sensed that they were still alive, and went to find an entrance to the tunnel they were in. However, he ran into Malum and his Vorox, who defeated the Bone Hunter and knocked him out.[3]

Fero, while riding through the deserts, spotted a caravan through his secondary eyelids, and recognized the caravan guard as Gelu. When he reached the former Glatorian, the caravan had been sent in another direction, and the Bone Hunter engaged Gelu in combat. After forcing Gelu off of his mount and disarming him of his Thornax Launcher, Fero dismounted from Skirmix and engaged the Ice Tribe warrior in personal combat. Though Fero slowly gained the upper hand, Gelu was eventually able to catch the Bone Hunter unawares, and knocked him down. Fero accidentally dropped a detailed map of Vulcanus he was carrying, which was recovered by Gelu. When questioned, Fero refused to speak to Gelu about the map, and the caravan guard eventually retreated after breaking Fero's Thornax Launcher. 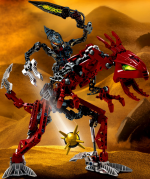 After a raiding party was gathered, comprised of veteran Bone Hunters, Fero was assigned to be the head of the team. After making camp in the desert, Fero spotted Ackar and Gelu riding out, and assumed them to be from traveling from Vulcanus. Fero ordered his team to spread out and trap the two warriors, though the duo evaded the hunting party after entering Vorox territory.

As they traveled, Fero was forced to discipline several of his team after they broke ranks to indulge in Vorox hunting. When one of the younger Hunters questioned the legitimacy of the mission, Fero callously killed him, and forced the team onward.

Fero eventually lead his team to the Iron Canyon, where they attempted to infiltrate Vulcanus through a dangerous mountain pass. Traps laid by the Agori slowed their progress, despite Fero's persistence. Fero eventually ordered his team to turn around, and retreated from the canyon. The team rode out for most of the next day, and Fero eventually turned the hunting party around to strike Vulcanus from a different direction, the order surprising his team. The Bone Hunters returned to Vulcanus and struck the village, pillaging homes. Ackar, the only remaining Glatorian defending the village, knocked Fero off of Skirmix, and began fighting the Bone Hunter. Fero slowly overpowered the Fire Tribe warrior, and was about to kill him when his blade was broken by Kiina. After his team was defeated by the Glatorian that had returned, Fero retreated from the fight, and rode off with Skirmix into the night.[4]

Fero later attempted to ambush Vastus, Tarduk, and Gresh while the Glatorian were out fortifying the walls of Tesara. Vastus struck the Bone Hunter's hiding spot, knocking Fero unconscious. The Glatorian looked through his possessions, discovering a Skrall shield.[5]

Fero participated in the Battle of Roxtus along with the rest of the Bone Hunters. However, he left the battle early, expecting the Skrall to lose, and fled into the wastelands.[6]

Fero is confident in his abilities, but knows not to let his confidence overcome him. He is an experienced tracker, and has an intimate knowledge of the deserts of Bara Magna. Despite any misgivings about an assignment, he is unwaveringly loyal to the mission, and will complete it to the best of his ability.

One of Fero's mechanical implants is an inner eyelid that protects his eyes from the sun.[7]

Fero carried a Skrall Tribal Design Blade (looted from an abandoned Glatorian training arena)[8] and Thornax Launcher. In his various battles, the blade was broken by a Thornax shot by Kiina[3] and his launcher crushed by Gelu's Sand Stalker[4]. He later acquired replacements for both these weapons.[5]

Fero as a set

Fero was released with Skirmix in the 8990 Fero & Skirmix boxed set of early 2009, which was exclusive to Walmart. Fero is made from 19 of the set's 148 pieces. He can be attached to the Rock Steed's back with a red axle. Fero shares Skirmix's "life counter" in the BIONICLE Action Figure Game, and it was reduced by two life points if Fero rather than the Rock Steed was struck by an opponent's Thornax.

8990 Fero & Skirmix was later repackaged to be included in the summer 2009 release of sets. The sole difference between the sets is the packaging and eye color of Skirmix.

"Go to the sand bog, I'm not telling you anything."
— Fero to Gelu, Raid on Vulcanus

"Let the Agori plan and prepare. Let them look for signs of our approach. They will never see us coming. No one ever does."
— Fero, Raid on Vulcanus