2009 was the ninth year of BIONICLE sets. 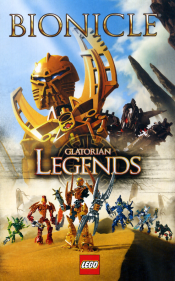 Promoted as a "soft reboot", 2009 introduced a new setting and new aesthetic for the sets. The small sets, the Agori, featured a similar building style to the previous year's Matoran, as well as using the same type of packaging. The canisters for the winter wave were the Glatorian; as opposed to typical heroes and villains, Glatorian were said to be freelance warriors, pledging their allegiance to the highest bidder.

Following the previous year's example of including titans in the initial wave, 2009 saw the release of two large box sets, the scavenging villain and his steed Fero & Skirmix, and the year's primary antagonist Tuma.

In the summer, six more Glatorian canister sets were released, under the sub-brand of "Legends". These sets were featured in the first BIONICLE movie since 2005, BIONICLE: The Legend Reborn, with the exception of Gelu. The title had no storyline significance, and instead it was chosen to fit with the title of the movie.[1]

The large sets for the summer were, like the previous year, larger vehicles with Agori or Glatorian riders. Five vehicles were released in total. A special-edition Toys 'R' Us titan set, an enlarged version of the "Toa" Mata Nui set, was also released. The summer wave also saw a rerelease of the Fero & Skirmix set with a different box art.

Another Brickmaster exclusive promotional special set was made available to subscribers of the program. This set depicted Click, a creature befriended by Mata Nui.

Each Glatorian carried a Thornax Launcher, which fired the spiky Thornax pieces when squeezed, and did not wear Kanohi, but rather helmets. Unlike the previous year, there was only one type of secondary weapon, which was included in every larger set.

The special edition Toa Mata Nui set included a golden Kanohi Ignika, a recolor of the silver one introduced the previous year. This was the only set of the year with a mask piece and pin connection to resemble the one used since 2004, while all other characters used newly designed heads and helmets.

Every wide-release set of the entire year (excluding the small sets) came included with a special Life Counter piece for playing an action game. This game involved using the set's Thornax Launcher to shoot an opposing character in order to decrease their Life Counter.