"We are done running."
— Toa Nuva Tahu, Mask of Light

The Battle for the Kanohi Avohkii was a battle fought at Kini-Nui. Six Rahkshi, created by Makuta Teridax to steal the Kanohi Avohkii, attempted to take the Mask of Light from Takua and Jaller. However, the Toa Nuva intervened, and thus the battle began.

Jaller and Takua, the two Matoran who were to find the Seventh Toa, had followed the glow of the Kanohi Avohkii all around Mata Nui, believing that its glow would lead them to the Toa of Light. When the Matoran finally arrived at Kini-Nui, Takua, frustrated and tired, angrily shook the Avohkii. This caused the Avohkii's light to strike part of a statue, carving the rock into part of a mask. At this point the Rahkshi Lerahk, Guurahk and Panrahk ambushed the two Matoran and Takua's Ussal Pewku, surrounding them at the Amaja-Nui. As the Matoran fled, the other three Rahkshi emerged from the ground. As the two Matoran readied their weapons for what they believed would be their last stand, a large glow permeated through the temple. From a cliff far above, the Toa Nuva Gali, Lewa, and Tahu jumped down and drew their weapons, encircling the two Matoran to protect them from the oncoming Rahkshi. As the creatures moved to confront them, the Toa Nuva Pohatu, Onua, and Kopaka arrived as well, having escaped a cave-in in Onu-Koro with Kopaka's help.[1] These three Toa Nuva joined ranks with their brothers and sister, uniting the Toa Nuva.

Lerahk, Guurahk, and Panrahk moved first, shooting a combined beam of energy at the Toa. Tahu declared that the Toa would not be broken and activated his Kanohi Hau Nuva, shielding his team from the blast.[2] When the shield dissipated, Toa Lewa leaped forward and unleashed a cyclone that picked up sand as it encompassed the three Rahkshi. Tahu joined Lewa, unleashing a stream of fire at the three Rahkshi caught in Lewa's sandstorm. The fire fused the sand and imprisoned the Rahkshi in glass, removing them from the fight.

United, the six Toa faced off against the other three Rahkshi. Kurahk attacked the Toa with a ring of anger, but it passed through them.[1] Lewa and Pohatu began to distract the three Rahkshi, and Vorahk accidentally struck Turahk with its staff, weakening the Rahkshi of Fear.[3] After that, Gali jumped between Kurahk and Turahk. When Kurahk swung its staff, Gali dodged, and the staff instead hit Turahk. This temporarily removed the Rahkshi of Fear from the fight. When Vorahk moved to attack the two Matoran, Tahu and Gali created a powerful burst of steam that sent the Rahkshi of Hunger plunging into Kurahk.[4] Pohatu flung his Climbing Claws at the two Rahkshi, locking them together. Onua and Tahu combined their powers to hit the two Rahkshi with a blast of lava. Gali cooled down the substance with a blast of water before Kopaka used his ice power to freeze the two Rahkshi. 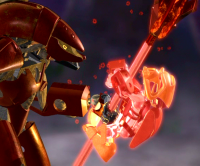 Jaller dying at the hands of Turahk

Distracted by this victory, the Toa did not notice Turahk recover and advance on the two Matoran. The Rahkshi of Fear surprised Jaller and Takua, unleashing its powers of fear on the latter, who was holding the Avohkii. This attack caused Takua to become frozen with fear. As the voice of the Makuta entered Takua's mind, the Turahk prepared to kill the Chronicler with another blow. Jaller, seeing Turahk's move, jumped onto the Rahkshi of Fear's staff to take the blow, and was hit by the full force of Turahk's blast of pure fear. At this point, the Toa Nuva finally noticed Turahk when they saw Pewku tumbling down a set of steps, tossed aside by the last Rahkshi.[5]

As Gali and Pohatu took on Turahk,[6] Takua shook off the fear attack and ran to his dying friend Jaller's side. Jaller, extremely weakened, told his friend that he had seen the hero in Takua and knew who the real Toa of Light was. Then Jaller fully succumbed to Turahk's fear attack, leaving Takua stricken with grief. As Jaller's last words came back to him, Takua realized what he had to do. The Rahkshi of Fear, meanwhile, struggled free from the two Toa's grip. Gali and Pohatu lost their footing before crashing into the other Toa Nuva.[7] Though he hesitated, Takua donned the Kanohi Avohkii. Energy from the mask enveloped Takua in a great light, blinding even the Toa Nuva. When the light had passed, Takua had become a Toa and presented himself as Takanuva, Toa of Light. Testing his powers, the new Toa unleashed a blast of light at Turahk, defeating him. Takanuva also finished transforming the statue, which turned out to be a carving of his mask as a Matoran.

After the battle, Takanuva and the Toa Nuva briefly honored Jaller's memory. They then built the Ussanui using pieces of the Rahkshi. Powered by the captured Kraata, the Ussanui would take Takanuva down to the Mangaia to confront Teridax. Takanuva told the Toa Nuva to gather the Matoran and Turaga while he went down alone. Before he departed, Hahli placed Jaller's mask on the Ussanui, to commemorate him as Takanuva's herald. After this, Takanuva flew down the entrance to Mangaia. Takanuva soon encountered the door to Teridax's lair: Hoping to plow through it, he struck the door at full speed, wrecking the Ussanui. As Takanuva investigated the wreckage, Hahli emerged as a stowaway, and informed Takanuva that she had decided to become the new Chronicler, as Takua's transformation had left the job post open. As the two entered Teridax's lair, Makuta himself slowly emerged from the shadows, taunting the fledgling Toa and preying on his inexperience and guilt from Jaller's. Defiant, Takanuva told Hahli to run back to the surface and summon the others while he challenged Makuta in the final battle for Mata Nui.