BIONICLE: Mask of Light (Game) is non-canon.
The subject of this article is not part of the canon BIONICLE storyline. The information on this page was not approved by the BIONICLE Story Team. Further, it either contradicts canon events or was never referenced in canon media. 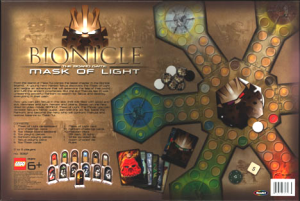 The back of the board game's box

The object of the game is to get Takua to Makuta's lair without losing Matoran. Players must then battle Makuta to end the game.

Each player rolls both dice. If the number on the green die is even, the player who rolled the die moves Takua by the number of spaces indicated by the white die. If the green die shows an odd number, one of the Rahkshi are moved instead of Takua. If a Rahkshi lands on the same space as Takua, or vice versa, the player must draw a Rahkshi card from the pile and place the Mask of Light over it. If the Mask's eyes glow green, the player receives one Matoran. If the eyes glow yellow, the player must place a Matoran in the center. And if the eyes glow red, the player places a Matoran in the discard pile. The battle process is repeated if a Rahkshi enters one of the Koro sections.

The configuration of the board slightly varies depending on the number of players. Each time a player is added, another Koro on an arm-shaped piece is added to the board. Two players use two arms, three players use three, and so on.