The BIONICLE storyline depicts many Locations that exist outside the prime reality.

Alternate Timelines are spawned from an act or choice made in the primary universe; for every decision made there, an alternate timeline exists where a different choice or outcome occurred. This list includes only the Alternate Timelines that have been visited by residents of the prime universe.

The Kingdom of the Great Spirit

For a full list of locations on Mata Nui, go here.

The Melding Alternate Universe is an alternate universe in which the Great Beings stopped the Core War and averted the Shattering by creating Matoran, Toa, and Makuta with roles counter to those held in the core dimension.[2]

Fortress of the Great Beings

The Great Beings never departed Spherus Magna in the Melding Universe, instead occupying at least one fortress that existed in neither the Black Spike nor Bara Magna regions of the planet.[3] Unlike the Valley of the Maze, which more closely resembled a deathtrap to deter intruders, the maze surrounding this fortress was designed to be less dangerous and more confusing. The Great Beings also included upgraded crystal and iron fortifications to the exterior of the fortress.

When the Matoran Mazeka and Vultraz were escorted here by the alternate Makuta Teridax, they passed through the many twists and turns of the exterior maze. They finally arrived at the main gate, guarded by Gorast and Icarax, and entered a council chamber inside the fortress. Here, six Great Beings conversed with the Matoran and decided to detain Vultraz for examination of his affiliation with Shadow. Mazeka elected to bring the alternate Teridax back to the main universe to balance the two realities, and departed with his new companion.[4]

This alternate universe diverged from the prime reality when the Brotherhood of Makuta decided to remain benevolent and not to interfere with Mata Nui's task. Mata Nui successfully repaired Spherus Magna, and the Matoran emigrated from the Matoran Universe to live with the Agori.[5]

The Toa Empire Alternate Universe is an alternate universe which diverged from the prime reality during Toa Mangai Tuyet's betrayal on Metru Nui. Toa ruled the universe in an oppressive dictatorship, led by Tuyet. Here, Dark Hunters and the Brotherhood of Makuta act as freedom fighters.[6]

For a full list of locations, please go here.

Pocket Dimensions are minor worlds that bear little or no relation to the core universe and its offshoots. They are not created by differing timelines and may be host to entirely different conditions than the universe of Solis Magna.

This is a pocket dimension in which Takanuva arrived using Brutaka's Kanohi Olmak. It has two races of sapient beings, the City-Building Creatures and Kestora, as well as a mysterious entity resembling a Spectral Mask.[12]

Dimensions of Meaningless Time and Space

This is a pocket dimension which is populated by beings of solid Light. The occupants feed on Shadow and, according to Brutaka, are always hungry.[15]

These are dimensions to which Makuta shift unused mass when they shapeshift.[16] Each Makuta has their own personal dimension, and cannot access the mass of others.[citation needed]

The Field of Shadows is a pocket dimension which is void of light. Only the Zivon naturally resides here.[17] 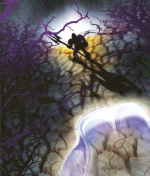 The City of Silver Pocket Dimension.

This is a pocket dimension where Tuyet was held captive for 1,500 years. It is entirely devoid of any Toa, so she was not able to absorb their power with the Nui Stone as the Order of Mata Nui interrogated her to learn the stone's secrets.[18]

Vanisher can open pocket dimensions where he traps enemies' energy attacks. He can keep the energy stored for as long as he wishes and then release it back at a target.[19]