"And somewhere in the endless void between here and there, the Mask of Life flew."
— Narrator, The Final Battle

Around 100,000 years ago, Spherus Magna was split into three pieces as the result of a cataclysmic event known as the Shattering. These three pieces were referred to as Bara Magna, Aqua Magna, and Bota Magna, and they began orbiting Solis Magna.

A number of planets being observed by Mata Nui

The Great Spirit Mata Nui, who controlled a giant robot, departed from Spherus Magna before it was split by the Shattering. He began a long journey observing the inhabited planets of the system, and occasionally landing on them to witness their societies. While returning from his journey, the Brotherhood of Makuta, an organization created to maintain order inside of him, rebelled against him, and their leader, Makuta Teridax, released a virus which rendered him comatose after three hundred years. This in turn caused his body to shut down, and it was drawn into the gravity of Aqua Magna, where it crashed on the ocean surface.

When Teridax took over the robot and the Matoran Universe inside of it, he sealed Mata Nui's spirit inside the Kanohi Ignika and hurled it out of the mechanical body and into the Solis Magna System, where it flew until the gravity of Bara Magna drew it onto that planet.

Using the Red Star, Teridax later departed Aqua Magna for Bara Magna, with the intention of destroying Mata Nui once and for all and begin a conquest of the known Universe. While in transit to Bara Magna, he teleported Helryx, Lewa, Artakha, Axonn, Brutaka, Miserix, Tuyet, Hafu, and Kapura outside of his body and into the void of space, but they were in turn taken to Bota Magna by Vezon. 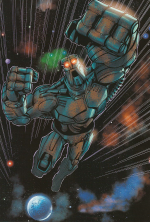 When Makuta Teridax arrived on Bara Magna, he began to fight Mata Nui, who had taken over the body of another ancient robot. During the battle, Mata Nui managed to redirect a blast of gravity from Teridax at Aqua Magna and Bota Magna, drawing them into the gravitational field of the planet; the two planets then fell towards Bara Magna. A fragment from Aqua Magna hit the back of Teridax's head, killing him. The two planets and their fragments then struck Bara Magna, restoring it into Spherus Magna. Mata Nui used the last of the powers of the ancient robot to restore the planet of Spherus Magna, filling it with life.