"All beings make mistakes, at some time. But part of a hero is admitting you were wrong and fixing them."
— Spectral Mask, Journey of Takanuva 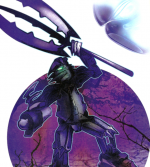 Takanuva talking to the Spectral Mask.

The Mask was the first being Toa Takanuva encountered upon his arrival in its pocket dimension. It attempted to inform him of a village in trouble, and Takanuva cut him short and hurried off to help before the being completed its tale. Takanuva then fought off the creature there, not knowing that the city was its home.

Takanuva later returned to the Mask, who informed the Toa that the Kestora he had "saved" were actually a species that had driven the benevolent race from their natural home. Takanuva later sought out the giant creature and made peace with it, helping it drive the invaders out of the city.

Upon returning to the Mask, it congratulated Takanuva and told him of the value of not judging based on appearance. In gratitude, it opened a dimensional portal to an alternate universe.