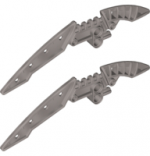 The Chargers in set form

The Chargers are the tools carried by the Ga-Matoran Dalu. They were given to her by Karzahni when she was sent to him to be repaired over a thousand years ago.

The Chargers can increase the attributes of a chosen target. They can be used to increase the speed or strength of Dalu's allies, or be used against enemies to her advantage. It takes up a lot of her energy to use them, however, and doing so can leave her feeling weak and even close to death.

In Island of Doom, Dalu increased Avak's speed so much that the Skakdi inadvertently charged into a rock wall when he meant to take a few steps. When he tried to get up, Dalu increased his strength to the point that he crushed the stone he was using for support. Dalu then magnified his hearing, overwhelming Avak's mind for a brief yet intense moment. However, the use of the Chargers so often in a few minutes caused Dalu to faint.

The Chargers were released in the Dalu set in 2006, and were represented by pieces previously used for a number of different tools/weapons in other BIONICLE sets, including Takanuva's Staff of Light.