Nuurakh lying in wait on an Airship

Before Toa Metru Vakama and Ta-Matoran Nuhrii climbed into a Fire Pit to retrieve the Ta-Metru Great Disk, Onewa distracted a squad of Nuurakh that was guarding the region by using his power over stone to send boulders at the Vahki.

Much later, Matau, Nokama, and Vakama encountered the Nuurakh in a cargo Airship in Le-Metru. At first, the Toa did not realize the presence of the Vahki, but they were soon attacked by them. The Vahki were quickly defeated by the Toa.

Soon after, some Nuurakh flew to the scene where the three Toa were fighting against the Tahtorak, and were quickly crushed by the beast.

During the Great Cataclysm, many Nuurakh were destroyed when Makuta Teridax overloaded their power grid.

When the Toa Metru sailed away through the Great Barrier, they were pursued by Nuurakh, who flew above them in the shadows. They hit Matau with their Staffs of Command, and he began to wheel the Lhikan around to head back. Whenua used his Ruru to find the Vahki, and the Toa Metru were able to quickly defeat them before continuing.

After the Visorak had taken over Metru Nui and the Toa Metru returned to the city to rescue the Matoran, the group of Toa encountered three Nuurakh alongside three Keerakh. Matau attempted to mislead them by using his Kanohi Mahiki to approach them under the guise of a Rorzakh, and then fabricated a story that the Toa had escaped to Ta-Metru. However, the group of Vahki saw Matau as a malfunctioning unit for allowing the Toa to "escape", and prepared to attack Matau. Before they could do so, the group of Vahki were suddenly distracted by an attack from a Visorak, which used its Rhotuka to slice their tools in half. Matau, forgotten by the Vahki in the diversion, escaped the scene.

All other remaining Nuurakh were destroyed by the Visorak swarms.[1] 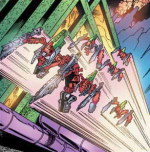 Nuurakh guarded some of the most prominent sites in the city, including the forges, foundries, and Fire Pits. That meant they could not afford to make mistakes, so, rather than risk direct confrontation with a target and possibly a prolonged chase, the Nuurakh instead preferred to wait in ambush[2] and rely on guile and numbers to win the day. This tactic required a great deal of patience, a quality Nuurakh were not known for, so they were easily frustrated. Vakama learned this the hard way, being forced to use his Kanohi Huna to clean molten Protodermis feeder tubes for a month after he asked one a question. As a result, they were known to turn on each other when things went wrong. It was not unusual to see a Nuurakh squad dispatched to break up a fight among other Nuurakh.

Nuurakh were outfitted with Staffs of Command as well as Kanoka Launchers built into their heads.

8614 Nuurakh was released as a set in the summer of 2004 and consisted of thirty-three pieces, including a Ta-Metru Kanoka. It can be combined with Rorzakh and Vorzakh to create a Kranua.

Later, a special edition version of the Nuurakh set was released in Target stores, including a Disk of Time instead of a Ta-Metru Kanoka Disk, as well as a gold Kanohi Vahi.

A Vahki Nuurakh in the Vahki Commercial