"The Disintegrator-Rahkshi, Guurahk. Your disintegrator beam has the power to crack any structure."
— Makuta Teridax's thoughts, Mask of Light

Guurahk are the Rahkshi of Disintegration.

There was a Guurahk kept in the Archives that once escaped. This Rahkshi, along with every other Rahkshi on Metru Nui, was aged to its death by Voporak. 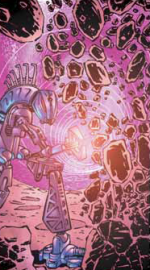 A Guurahk using its Staff of Disintegration

Makuta Teridax created a Guurahk, along with a Turahk, Panrahk, Lerahk, Kurahk, and Vorahk, and placed them in large green vats in his underground lair, Mangaia. When he learned that the Kanohi Avohkii had been discovered, he placed a Kraata in the Panrahk's, Guurahk's, and Lerahk's Rahkshi armor and sent them out to retrieve the mask. They emerged from Mangaia, attacking Gali Nuva, who promptly escaped. They then arrived in Ta-Koro, in pursuit of Takua. Guurahk menaced Hahli, but she was saved by Gali. After fighting Tahu and Gali, Guurahk and other two Rahkshi destroyed the village.

Later, the Rahkshi engaged in another fight against Tahu, Gali, and Lewa. Guurahk created a crevasse with its disintegration powers, into which Gali almost fell. Guurahk was about to kill her when Lewa saved Gali and propelled Guurahk into the Tahu and Lerahk. The Rahkshi regrouped and trapped the Toa Nuva under a rockslide. Guurahk was also responsible for trapping Onua, Pohatu and Whenua inside the Kraata Cave.

Guurahk, Panrahk, and Lerahk then chased Takua and Jaller into Ko-Wahi, where they were frozen by Kopaka. Guurahk was later freed,[1] and joined all five of its brothers in an attack on Kopaka. After Tahu, Lewa, and Gali Nuva showed up to help Kopaka, Guurahk attempted to bring down rocks on Gali and Kopaka; when this failed, the Rahkshi created a distraction and left.

During their search for Takua, Guurahk combined with Vorahk and Panrahk to form a Rahkshi Kaita Vo. This Kaita, along with its brother, the Rahkshi Kaita Za, confronted Tahu, Lewa and Kopaka, but the Kaita were defeated. The Kaita later separated into its component Rahkshi.

Later, Guurahk and its five brothers cornered Takua and Jaller at Kini-Nui, but the six Toa Nuva arrived and did battle with the Rahkshi. Guurahk, Lerahk, and Panrahk made a combined attack against the Toa Nuva, but Tahu's Hau Nuva blocked the attack. Lewa stirred up a sand cyclone that caught Guurahk, Panrahk, and Lerahk in its currents. Tahu then blasted fire at the tornado to seal the Rahkshi in a glass prison.

Guurahk's armor was later dismantled, along with that of the other five Rahkshi, to build the Ussanui.

They are created from Kraata-Ul that are dipped into Energized Protodermis. A second Kraata-Ul is then needed to run the Rahkshi armor that is created.

Guurahk are agile and fierce hunters. A Guurahk will spend long periods of time merely observing an enemy before it will strike. It analyzes every strength and weakness in a target before acting. The Guurahk will search for the weakest point in a structure before using its power, to conserve energy.

Guurahk carry Staffs of Disintegration, through which they can release a cone-shaped energy wave that makes any object it touches crumble to dust.

Guurahk was released as a set in the summer of 2003. It contained forty-five pieces, including a rubbery Kraata. It could be combined with the Panrahk and Vorahk sets to form the Rahkshi Kaita Vo. Certain canister sets were packaged with a mini CD that explained the characters of Guurahk and Takanuva.

The Guurahk as seen in Mask of Light