"Even in the middle of the night, the city of Roxtus was busy. Skrall patrols were constantly on the move, while bone hunters rode up to the gates with captive Glatorian and Vorox to sell. Agori prisoners taken in the desert were hard at work building new walls and repairing Skrall weapons and armor. The work never stopped ... it couldn't be allowed to, Tuma knew."
— Narrator, Empire of the Skrall

Roxtus was a village of Spherus Magna once inhabited by the Rock Tribe.

Roxtus was founded after the explosion of a giant robot left large metallic structures all over the region of Bara Magna. The skull piece was adapted into a village by mysterious inhabitants, who remained there for a long period of time. After the Shattering, Roxtus became part of the new planet of Bara Magna. For many years, it was uninhabited due to the area's hazardous terrain and local wildlife until the arrival of the Skrall. The Skrall then banned other tribes from visiting Roxtus unless specifically invited. Roxtus was constantly alive with action, with regular Skrall patrols, Bone Hunters arriving to sell Glatorian and Agori, and the slave Agori being forced to make repairs to the Skrall's armor and weapons. Rumors circulated that the Skrall had these Agori imprisoned in Roxtus, though the Skrall continuously denied this.

Following the capture of several Vorox and their leader, the exiled Glatorian Malum, by a Skrall patrol, they were brought to Roxtus, where the Vorox were mistreated and Malum taken to speak to Tuma, who wished to gain control of the Vorox. After conversing, Malum was taken to the arena to demonstrate his ability to control the Vorox. Upon doing so, Malum stated that Skrall would likely be able to command the Vorox as well, having gained their respect. A Skrall warrior was then ordered to duplicate Malum's demonstration. When he tried to do so, the Vorox, instead of displaying docile behavior, went on a rampage, causing chaos which Malum took advantage of to make his escape from the village with the imprisoned Vorox.

While attempting to convince a group of Glatorian to protect Vulcanus from Bone Hunters, the Hero Agori traveled here to gain a Skrall's Seal. The Skrall and one of the Agori, Atakus, only cooperated after being given large amounts of Thornax.

As Malum was holding their caravan hostage, Gresh and Strakk had to infiltrate Roxtus and retrieve a Flame Sword for Malum. They hid underneath a caravan, and were not found when Atakus inspected the incoming shipments. They snuck into Roxtus' treasure room and found the Flame Sword of Malum's, but it had Ackar's name inscribed on it. Strakk then opened the Spikit pens, causing mass chaos for the Glatorian to escape. Gresh found a tracking device in the sword and crushed it, thinking it a trap for Ackar as the two fled.

Much later, Mata Nui came to Roxtus, following the capture of his allies Kiina and Berix, for their freedom. He confronted Tuma, and the two engaged in a one-on-one duel. Mata Nui felled the Skrall leader, and the Agori Metus revealed himself as the traitor. A giant made of Scarabax Beetles attacked the Skrall, breaking their ranks, and allowing the united forces of the villages to attack. After the battle, Roxtus was abandoned by its inhabitants.

After it was abandoned, the main shelter of Roxtus was dragged over to Tesara to combine with the other robot pieces in order to form the Mega-Village, unknowingly connecting the Prototype Robot.

Roxtus was the largest of Bara Magna's villages, located in the Black Spike Mountains at the base of Skull Mountain. Like most Bara Magna villages, it consisted of a single primary structure housing several dwellings and workplaces.

An arena was used mainly for the training of Skrall, as no Glatorian entered Roxtus unless on the Skrall's invitation. The arena was in the shape of a circle, with a large Skrall symbol carved into the floor. Sharp, black rocks are lined against the edge of the arena.

Roxtus was originally home to an unknown group. These inhabitants have since disappeared, spawning a number of rumors as to their status. Some say that they were murdered by desert beasts, while others say they were trapped on Bota Magna after the Shattering. 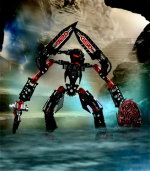 The most populated tribe, the Rock Tribe contains a large number of Agori and Skrall. They also imprison Agori on occasion.

The Skrall comprised the bulk of the military, and would only accept orders from a ranking superior. They journeyed out to fight at the behest of their former leader, Tuma, who also resided in Roxtus and rarely left the village.

"Roxtus was the largest village in all of Bara Magna, big enough to be called a city. Home to the Skrall warriors and the rock tribe Agori, it was a place few had visited even before the war had begun. The Skrall were not friendly or particularly good hosts. Most of the Glatorian or Agori who wound up there did so against their will, having been captured by Bone Hunters and sold into slavery in Roxtus."
— Narrator, The Legend Reborn