"Both wise and a warrior, he had kept everyone's morale up in the first years after the Fall. If not for him, civilization might have ceased to exist here in this massive cavern."
— Narrator, Shadows in the Sky

Kirop as a Shadow Matoran in Karda Nui

Kirop was created by the Great Beings to assist in the construction of the Great Spirit Mata Nui. Kirop became the leader of the Av-Matoran and directed their efforts to labor in darkness to create the islands and locations of the Matoran Universe. After this duty was completed, the Av-Matoran were tasked with the preparation of the universe core, Karda Nui for the Great Spirit's awakening. During this occupation, the Avohkah, Rahi by-products of the Matoran's efforts, threatened the Matoran, but the Toa Mata soon arrived to deal with the threat.[6] Kirop and the Av-Matoran later returned to their homeland in the caves below the Southern Continent.

During the Great Cataclysm, part of the Av-Matoran homeland was damaged by the resulting earthquake and fell into Karda Nui, causing the Stalactite Villages to form. Kirop took up residence in one of the villages and continued his role as leader, helping the Matoran to adapt to the hardships of their new lifestyle.

During the Siege of Karda Nui, Kirop was able to identify the invaders as Makuta. He led a rescue mission on the second day on the invasion, but only succeeded in having his light drained by Makuta Chirox and was turned into a Shadow Matoran. He became Chirox's preferred Shadow Matoran after the Makuta was blinded by Toa Mahri Matoro's usage of the Kanohi Ignika. Having once been the leader of the Av-Matoran, he knew everything about the resistance and used that knowledge against them. 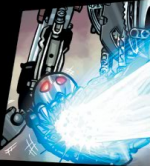 Kirop being healed by the Klakk

After Kirop was transformed, he kept a part of the Keystone in his possession as one of the duties of being Karda Nui's leader. In an attempt by the Toa Nuva to get a hold of it, Lewa knocked him out of the sky with a gust of wind. Kopaka quickly got to the place where he fell and he was imprisoned by them in a Matoran shelter.

The Toa Nuva then purposely allowed him to overhear a fabricated story about how they had discovered a method of destroying all of the Makuta's Shadow Leeches, hoping he would flee to the Shadow Leech Hive and lead them there. He soon departed and unknowingly led them and their Matoran partners to the hive, where Toa Ignika joined them.

Later, after the hive was destroyed by Toa Ignika, Mutran blamed Kirop for the destruction of the hive and threatened to kill him, but Antroz intervened and told him that, as long as they still fought the war, it was necessary not to get rid of anyone on their side.[7]

Kirop was later cured and transformed back into an Av-Matoran by a Klakk, and resumed his post as leader of the Av-Matoran.[8]

Under the order of Takanuva, Kirop and the other Av-Matoran fled Karda Nui and traveled to Metru Nui. There, they celebrated the reawakening of Mata Nui, although the occupants of the Coliseum were soon interrupted by Teridax who announced his rule over the universe.

When the Great Spirit Robot was damaged beyond repair and Teridax was defeated by Mata Nui, he sent a wave of Life energy throughout the planet, which, among other things, reversed the mutations the surviving Av-Matoran received from Mutran.[5] The Matoran of Metru Nui then made a mass exodus to the reformed planet of Spherus Magna.[9][10]

Kirop as a Shadow Matoran

As an Av-Matoran, Kirop has the ability to change how the color of his armor appears. He has been trained to use this ability reflexively, helping keep his elemental affiliation secret. This ability was briefly replaced with shadow powers upon his transformation into a Shadow Matoran, but has since been restored. Kirop can also channel small amounts of Light energy through his hands or tools.

As an Av-Matoran, Kirop wielded dual Power Swords and had a rocket booster attached to his back. When Kirop was a Shadow Matoran, he was mutated; he gained wings, and his weapons were attached to his hand and became claw blades. However, he lost these features after his mutations were undone.[5]

Kirop combined with the Krika set

8949 Kirop was released in early 2008 as one of the six Matoran sets, consisting of 14 pieces. He can be attached to Chirox's back. Like all Shadow Matoran, Kirop wears a mask featuring a blend of two colors of plastic—in his case, black and silver. Kirop is also advertised to attach to Makuta Krika's back via the Matoran connection feature, although it is just to promote the function and is not used in the story.

"All those years we spent hiding in the light … we were wrong. We should have embraced the darkness from the start."
— Kirop, BIONICLE.com