"These Matoran are stubborn, all but one of their villages captured ... their friends turned to our side ... their position hopeless ... and yet still, they resist!"
— Makuta Chirox, Shadows in the Sky

The Siege of Karda Nui was a week-long siege, where the Brotherhood of Makuta turned all but about one hundred Av-Matoran of Karda Nui into Shadow Matoran, conquering all but one of the Stalactite Villages.

A week before Matoro used the Kanohi Ignika in Karda Nui, Tanma and Gavla were checking the scareRahi around their village[1] when Chirox made the first attack and launched a Tridax Pod, successfully draining the light from Gavla, turning her into the first Shadow Matoran. The attack continued, and the only Matoran who was not corrupted was Tanma.

Most of the vine bridges between the villages were severed during the siege, either by the Makuta, Shadow Matoran, or the Av-Matoran to prevent easy access from a captured village. The remaining Matoran surrounded the last village with a Lightvine, which had to be maintained by the Matoran. While attempting to repair it, Radiak had his light drained by Vamprah.

The remaining Av-Matoran hid in a storage area, using it as a fallout shelter while the Makuta were attacking, simply waiting for the Shadow Leeches to live out their short life spans. On the seventh day, only one village of 100 Av-Matoran was left.

After a Shadow Leech attack, Tanma peered out of the shelter, and saw Matoro about to use the Mask of Life, which blinded the three Makuta in the sky. The Av-Matoran decided to take advantage of the situation and try to drive the Makuta back.

Arrival of the Toa Nuva 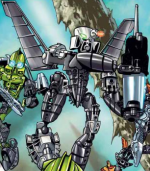 The Makuta were taken by surprise by the attacks, but quickly decided use Shadow Matoran as their "eyes" by creating a mental link with them, allowing them to see exactly what the Shadow Matoran saw to compensate, however it took a small process of elimination before the Makuta had chosen a Matoran that was up for the job (those not up for the job were literally thrown back). Gavla, Radiak and Kirop were chosen for Vamprah, Antroz, and Chirox respectively. Their sight renewed, the Makuta were able to quickly take away the small advantage held by the Av-Matoran who were starting to retreat.

The Makuta used their power to stun and slow them down, and converted two more Av-Matoran into Shadow Matoran, who were soon attacked by their former comrades.

The Toa Nuva, in their new Adaptive Armor, were teleported into Karda Nui by Artakha, and arrived in the midst of the conflict. They soon realized their opponents were Makuta, whom they had at first mistaken for Rahi, and fought back against them. Most of the Toa had trouble adapting to aerial combat, but were able help the remaining Av-Matoran.

Lewa tried to capture a Shadow Leech for later study, but Tanma quickly stopped him, which resulted in Lewa's mind being flooded by Tanma's memories before he successfully shut them out.

Onua soon realized that the Makuta relied on the Shadow Matoran for sight, and informed his fellow Toa of this. When Gali questioned whether they should fight the Shadow Matoran, Tahu noted that they were currently their enemies. The Toa quickly removed the Matoran from atop the Makuta, rendering the bat-like creatures unable to see again. With that victory the Toa returned to the village with the Av-Matoran to discuss further plans.

Once the Makuta had been separated from their respective Shadow Matoran, the Av-Matoran ended up being successful in chasing the Makuta back to their lair with the help of the Toa Nuva.

Later on, the Toa engaged in a discussion with the Av-Matoran Tanma and Photok, who told the Toa about what had happened before the battle that blinded the Makuta. It was during this that Pohatu was able to recall his forgotten memories of Karda Nui, and told his fellow Toa that they had "come home". Once the Matoran had told the Toa that the blinding mask had probably fallen into the swamp below if it had not been destroyed, an argument broke out amidst the Toa about the mask's retrieval. Tahu insisted that they should head down into the swamp to retrieve the mask before the Makuta did, while Kopaka explained that they needed to stay in the skies to protect the Av-Matoran should the Makuta attack again.

This resulted in the Toa Nuva splitting into two teams: one to protect the Matoran and one to retrieve the mask from the swamp. Lewa, Kopaka and Pohatu decided that they would stay in the skies to fend off the Makuta, while Tahu, Gali and Onua would head into the swamp and get the mask before the Makuta did.

The Makuta, disgruntled about the Toa Nuva's arrival, sent for Icarax, who had previously refused to journey to Karda Nui, to aid them.