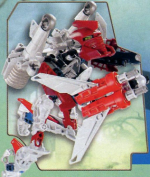 Trinuma has two Nynrah Ghost Blasters mounted on his back. They grant him the ability to take control of any mechanical object they strike. He carries a shield and wears the Great Mask of Charisma, which allows him to convince others to become loyal to his cause. Trinuma also possesses tools that can emit kinetic energy, allowing him to fly. He can also use them to fire bursts of kinetic force.[13] With the exception of the Nynrah Ghost Blasters, Trinuma's tools are all made of Protosteel.[14][15] 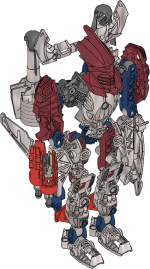