"Constructed entirely of stone and metal, it looked like some obscene growth that had erupted from the core of the island."
— Narrator, Shadows in the Sky

The Destral Fortress, a large fortress that covered most of the island of Destral, was the headquarters of the Brotherhood of Makuta. 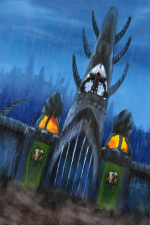 An entrance to the Destral Fortress

Construction of the fortress was completed soon after the creation of the Brotherhood. The first and largest of its fortresses, it contained workshops, laboratories with large quantities of Energized Protodermis, armories, prison cells, interrogation chambers, living quarters, and a library filled with forbidden knowledge. Since it held so many items of value, it was always heavily guarded by concealed weaponry, traps, Visorak, Rahkshi, and Exo-Toa.

The fortress was constructed completely from stone and metal. Enormous gates provided its heavily-guarded entrance, and Brotherhood banners hung from the parapets.

Roughly 1,300 years before the time of the Toa Nuva, the six Toa Hagah assaulted the Destral Fortress, stealing the Kanohi Avohkii and the Makoki Stone. The failure of the Dark Hunter guards stationed at the Fortress to stop the Toa marked the first sign of tensions between the Brotherhood of Makuta and the Dark Hunters. Meanwhile, a Brotherhood servant who was specifically tasked with the guardianship of the Avohkii was cast out of the Brotherhood for his failure. He was later recruited into the Dark Hunters and was given the codename "Seeker".

During the Great Cataclysm, the Destral Fortress was demolished by the resulting earthquake. During the collapse, rubble destroyed a Makuta's armor. The fortress was later rebuilt, but was destroyed centuries later along with the rest of Destral when it was attacked by the Order of Mata Nui. Pohatu and Takanuva later came here to look for weapons.

Icarax seated on the Throne.

There was a chamber within the fortress containing the throne for the leader of the Brotherhood of Makuta. The throne room was originally occupied by Miserix, and later, by Teridax. However, due to Teridax's prolonged absence from Destral, Icarax had taken to sitting in the throne as well, symbolizing his desire to lead the Brotherhood.

The nearly 500-foot (150 meter) high walls were mounted with Toa masks and weapons, Rahi heads, and other spoils of past Brotherhood conquests. The throne itself was colored a deep black. Beneath at least one of the floor panels was a pool of Energized Protodermis.

The throne room was destroyed when the island was attacked by the Order of Mata Nui.

The Convocation Chamber was the site of meetings between all Makuta when a Convocation was demanded. Typically, it was the leader of the Brotherhood of Makuta who summoned Makuta to the island.

After Teridax's rebellion, he had the Makuta who had sided with Miserix hunted down and their Kanohi placed in the Convocation Chamber as a reminder of what will happen if one opposed his plan.

This massive chamber, with walls at least forty feet high, lay in a sub-basement of the fortress. It was filled with Stasis Tubes containing the many Shadow Takanuva whom Makuta Tridax kidnapped from alternate universes with a Kanohi Olmak. In the center of the room was a small table, on which Tridax kept the Olmak.

Tridax's vault was destroyed when the island was attacked by the Order of Mata Nui, and many of the Stasis Tubes were shattered. Most of the Shadow Takanuva died in the collapse.