Prior to the Great Cataclysm, Kokkan lived and worked in Ko-Metru. He was captured by Vahki under the command of Makuta Teridax disguised as Turaga Dume. He was then placed into a Matoran Sphere and went into stasis, but was later rescued by the Toa Metru and reawakened on the shores of Naho Bay on the island of Mata Nui.

On Mata Nui, Kokkan was smaller and weaker as an effect of the Matoran Spheres, and lost his previous memories. Regardless, shortly after their arrival on Mata Nui, he participated in the construction of Ko-Koro from recycled pieces of the Airships which had been used by the Toa to transport the Matoran to Mata Nui in the Great Rescue.[3]

In Ko-Koro, Kokkan became a Trader. Following the defeat of the Bohrok-Kal, he was rebuilt into a more able form, similar to the one he had had on Metru Nui. 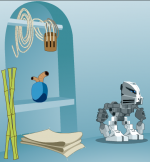 Kokkan later helped in the construction of Boats to return to Metru Nui, where he briefly resided. He also contributed to the rebuilding of the city, which began immediately after the arrival of the Matoran in the island city. He temporarily stopped his work of reconstruction on order of Jaller, to force the Turaga to reveal where the Toa Nuva had gone, but he eventually got back to work.

Due the effects of the Battle of Bara Magna, Kokkan and the other Matoran relocated to the reformed Spherus Magna, where they now live.[4][5]