"Tehutti's always here, Toa 'Whenua'. He spends his whole life down with the exhibits."
— Damek, Mystery of Metru Nui

Tehutti is an ambitious Onu-Matoran native to Metru Nui and one of the Matoran who knew the location of a Great Disk.

Tehutti being stalked by a Rahkshi in the Archives

Tehutti was an Archivist who worked alongside Whenua before Whenua was transformed into a Toa. He was also friends with the Po-Matoran Ahkmou. Tehutti eventually came to know of the location of a Great Disk hidden deep within the Archives, and became the target of a scheme developed by Ahkmou.

One day, Tehutti received a message from a Ga-Matoran named Vhisola that a Nui-Jaga was to be delivered that day. He was suspicious of this, as Nui-Jaga lived in Po-Metru, but nevertheless was excited to receive the Nui-Jaga. Upon heading to the dock where all live exhibits from other metru were received, he was informed that what he had been told was not true. He then descended a ladder to one of the sublevels. However, the ladder was broken, and he fell into a dangerous sublevel and was trapped under rubble. Whenua, who was searching for Tehutti, followed Tehutti's steps and freed him from the rubble. They then escaped a Rahkshi of Heat Vision by releasing a Muaka.[3]

Tehutti and Whenua joined Nuju and Ehrye to find the Great Disks, and Tehutti told them the location of the Onu-Metru Great Disk. He was struck by the Rorzakh's Staffs of Presence, so Whenua and Nuju left him with Ehrye on a level Tehutti was not familiar with, so both would be safe but unable to run away. After recovering Onu-Metru's Great Disk, the group traveled to Ko-Metru. There, Tehutti was struck by a Keerakh's Staffs of Confusion, causing him to lose his sense of time and space and believe he was cataloging a Fikou exhibit in the Archives. The Toa again left the Matoran behind to find the Great Disk.

After the Toa Metru found all six Great Disks, they and their Matoran guides traveled to the Great Furnace in search of the King Root of the Morbuzakh. However, the group was attacked by Morbuzakh vines before they could enter. Tehutti showed the other five Matoran how to form a Matoran Nui. The Matoran Nui kept the Morbuzakh at bay, allowing the Toa Metru to access the Great Furnace. After some time, the Matoran Nui split apart, returning the six Matoran to their original forms. Ahkmou then fled the group, for which Tehutti condemned him.[4]

Along with all other Matoran, Tehutti was summoned by Makuta Teridax to the Coliseum, where the Vahki imprisoned him in a Matoran Sphere. He was later freed by the Toa Metru and reawakened on Mata Nui.[5]

Due to his confinement in a Matoran Sphere, Tehutti was physically shrunken and weakened and forgot his memories of life on Metru Nui. Nevertheless, in the beginning years of the Dark Time, he assisted in the construction of Onu-Koro, under Turaga Whenua's instruction, taking materials from Airships used in the Great Rescue.[6]

On Mata Nui, Tehutti's mask was damaged and replaced by a Kanohi Kakama.[7] He started to work in the Great Mine in Onu-Wahi as a Miner.[8] He temporarily vacated Onu-Koro with the other Matoran when the Bohrok attacked.[9] Tehutti was rebuilt after the defeat of the Bohrok-Kal.[10] He was again evacuated from Onu-Koro during the Rahkshi attack.[11]

Tehutti later joined in the creation of boats to return to Metru Nui.[12] He and the other Matoran then underwent a joint effort to rebuild the city, which had suffered damage. He temporarily stopped his work of reconstruction on order of Jaller, to force the Turaga to reveal where the Toa Nuva had gone, but he eventually got back to work.[13]

Tehutti and the other remaining Matoran later left Metru Nui for Spherus Magna after the Great Spirit Robot was incapacitated.[14][15]

Tehutti always wanted a new exhibit to mark his name on, and his hard-headedness often caused him to overlook what was the right thing to do, so long as his name was put on a new item in the Archives. Tehutti had no definite purpose for the Great Disk, except maybe to put it on exhibit and achieve recognition for his work.[3]

Like all Onu-Matoran, Tehutti could see in the dark, and was stronger than Matoran of other elements.[16]

Tehutti wore a powerless Noble Kanohi Huna, but it was damaged on Mata Nui, so he took to wearing a powerless Great Kanohi Kakama.[17]

Tehutti carried a Kanoka Launcher and generally used a teleportation Kanoka, code 685, to move around the complex Archives.[note 1] 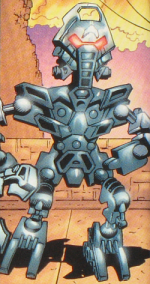 Tehutti as he appeared in the comics

8609 Tehutti was released in early 2004 as one of the six "small sets." Tehutti wore a black Kanohi Huna with silver markings on the top. The set also included a Kanoka launcher and a glow-in-the-dark Onu-Metru Kanoka disk with a special code on it. This could be entered at BIONICLE.com for Kanoka Club points.

Pieces from this set could also be combined with pieces from the 8608 Vhisola and 8612 Ehrye sets to form a Kavinika model.