The Attack on Onu-Koro was a battle in which three Rahkshi attacked Onu-Koro during their search for the Kanohi Avohkii and were opposed by the Toa Nuva. 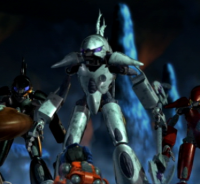 Takua arrived in Onu-Koro as Pohatu and Onua began foretelling news to the Onu-Matoran about the discovered Avohkii. Noticing the Chronicler, they asked where his companion was. The Av-Matoran explained that they were separated by Rahkshi. However, this was a lie, the Matoran actually parting because of Takua’s unspoken fear of losing Jaller to a threatening Teridax, if he continued in their mission. Before explaining further, the cavern exploded and revealed three recently created Rahkshi sent by Teridax: Turahk, Kurahk, and Vorahk. Using his Elemental Powers over Earth, Onua wasted no time in welcoming the visitors and buried them under a huge pile of rubble. As the Matoran present ran for cover, the Rahkshi freed themselves and began to attack. Vorahk quickly overwhelmed Onua using its staff to steal the Toa’s energy and rendering him unconscious. As Pohatu ran to save him, Turahk hit the Toa of Stone with a wave of fear from its own staff that immobilized him.

Takua, who was trying to escape, then chose to fight against the Rahkshi, wanting to help the fallen heroes. Grabbing a Kolhii Stick, he mounted Pewku and charged the Kurahk. The Rahkshi intercepted the blow easily and further screamed for its brethren to surround Takua. Tahu, who then arrived to drive off the creatures, was hit with a ring of pure anger from Kurahk which brought him to the ground. Lewa then rescued Takua and Pewku by flight, bringing them away from the battle. Promptly instructing him to find Jaller and warn him, he then soared off to rejoin the Toa Nuva.

While the Rahkshi flew off to pursue Takua, Gali approached the fallen Tahu, but the Toa Nuva of Fire, whose poison taint had been amplified by Kurahk's power, attacked her. When the Toa of Water dodged, Tahu lunged at Lewa, who had joined to fight.[1] Gali launched a water stream at Tahu, and Kopaka, who had suddenly appeared, froze the Toa of Fire.

Meanwhile, Takua had entered a foundry and started climbing the chimney, when the Rahkshi appeared and tried to grab him. However, Onua and Pohatu, who had recovered from the previous defeat, arrived as well. Pohatu trapped the Turahk, while Onua collapsed the ceiling once again using his elemental power. Then he used his Quake Breakers to smash through the collapsed foundry entrace.[2] As the two Toa Nuva ran to join their comrades, the roof of Onu-Koro fell down around them and unfortunately buried Onua and Pohatu.

Gali, Lewa and Kopaka brought Tahu out of a tunnel and into the jungle, where Gali used her powers to heal him. After a small skirmish with the Rahkshi Kaita, Kopaka left the others and rescued Onua and Pohatu from the rubble.

Meanwhile Takua emerged from the chimney in Ko-Wahi and went to find Jaller, to warn him of the Rahkshi threat.