"Now that Nokama has become a Toa, she has no time for me. [...] But she'll be sorry. Once I find that special Kanoka disk, everyone will forget about her... just like she's forgotten about me!"
— Vhisola's Diary, Nokama's Toa Metru Mini Promo CD

Vhisola is a Ga-Matoran native to Metru Nui and one of the six Matoran who knew the location of a Great Disk.

Vhisola was a Student of Nokama in Ga-Metru, and considered her to be her best friend. She was, however, possessive of her teacher, and despised Nokama's other friends.

When Nokama was transformed into a Toa, Vhisola became jealous, and planned to use her knowledge of the location of Ga-Metru's Great Disk to become more famous than her friend. Unfortunately, this attracted the attention of the Dark Hunters Nidhiki and Krekka, who were searching for the Great Disks themselves. They pursued her, hoping to retrieve the Disk, but were foiled in their attempt by Toa Nokama. Vhisola then told Nokama the Great Disk's location, and shared her theory that the Disks could possibly have the power to destroy the Morbuzakh. Thanks to her research, the Toa realized that they had to destroy the King Root of the Morbuzakh and that it was likely in the Great Furnace.[3]

Vhisola accompanied five other Matoran and the Toa Metru to the Great Furnace. When the Toa were attacked by young Morbuzakh vines, Vhisola merged with Nuhrii, Ahkmou, Ehrye, Tehutti, and Orkahm to form a Matoran Nui. As one, they held off the vines so that the Toa could go into the inner chamber and battle the Morbuzakh. The Matoran Nui subsequently diffused, and the Matoran went their separate ways.[4]

Some time later, by order of Turaga Dume, all the Matoran of Metru Nui, including Vhisola, entered the Coliseum and were forced into Matoran Spheres. During her time inside the sphere, Vhisola's body was reduced in size, and all her memories were erased. Makuta Teridax, who had impersonated Dume in this charade, later created an illusion world in which Vhisola had become Toa of Water, something that Makuta believed was the true course of destiny. In truth, he himself had been deceived in order to insure that Nokama became Toa of Water.

She was later awakened on Mata Nui when the Toa Metru sacrificed their Toa Power and became Turaga for the Matoran's sake.[5]

In the beginning years of the Dark Time, under Nokama's direction, Vhisola helped build Ga-Koro using parts of Airships utilized by the Toa during the Great Rescue.[6] Vhisola lived in Ga-Koro for a millennium, facing the darkness of Makuta Teridax who menaced the island with his infected Rahi. But, after the thousand years, the Toa Mata arrived, and began to combat Teridax's infected Rahi.[7]

Vhisola was trapped in a sunken hut along with all the other Ga-Matoran during an infected Rahi attack on the village. She was later freed by Takua and witnessed Gali fighting off the Tarakava.[8]

Toward the end of the battles with the Bohrok, she faced the Pahrak alongside the other Matoran in Ga-Koro, until the defeat of the Bahrag rendered the Bohrok harmless.[9]

Later, following the Bohrok-Kal's defeat, Vhisola was rebuilt into a form like the one she had had before being shrunk by the Matoran Sphere.[10]

Later, after the city of Metru Nui had been rediscovered, Vhisola helped in the construction of Boats to transport her and the other Matoran to Metru Nui.[3] She also participated in work to rebuild the city, which had been damaged in the past thousand years. She temporarily stopped her work of reconstruction on order of Jaller, to force the Turaga to reveal where the Toa Nuva had gone, but she eventually got back to work.[11]

Following the Great Spirit Robot being critically damaged, Vhisola and other surviving Matoran living in Metru Nui relocated to Spherus Magna to continue their lives.[12][13]

Vhisola was a talented athlete.[note 1] Vhisola liked Nokama very much, and would become jealous if Nokama was spending time with someone else, to Nokama's chagrin. When Nokama became a Toa, this jealousy reached an intense level, prompting Vhisola to try and retrieve the Great Disk of Ga-Metru all by herself.[3]

Like all Ga-Matoran, Vhisola has great lung capacity, and is a very good swimmer.

Vhisola typically carried a Kanoka Launcher and a level six freezing Kanoka with a code of 226 to be able to freeze the canals found all over Ga-Metru and cross them.[note 1]

8608 Vhisola was released in early 2004 as one of the six small sets. Like her fellow Matoran of Metru Nui sets, she wears a mask featuring a blend of plastics in silver and her primary color (dark blue). She can be combined with 8609 Tehutti and 8612 Ehrye to make the Kavinika combiner model. The set included a Kanoka disk and silver Kanoka Launcher among its twenty-seven pieces. 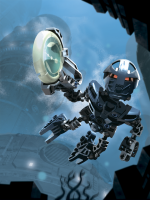 Vhisola as a set