Nokama's Toa Metru Mini Promo CD is semi-canon.
The subject of this article has aspects that are not part of the canon BIONICLE storyline. As such some, but not all, information on this page is non-canon. Non-canon information is presented for completeness and should not be removed.

Nokama's Metru Mini Promo CD was one of six mini CD-ROMs packaged with special releases of the Toa Metru Nokama canisters in 2004. The content was later released on BIONICLE.com. 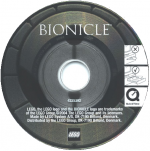 Nokama at the Lab

Nokama swimming under the Ga-Metru building