Zemya is an Onu-Matoran native to Metru Nui.

Before the Great Cataclysm, Zemya lived and worked in Onu-Metru. He was captured by the Vahki under the command of Makuta Teridax, disguised as Turaga Dume. He was then forced into a Matoran Sphere but was later rescued by the Toa Metru and awakened on the shores of Naho Bay on the island of Mata Nui.[3] 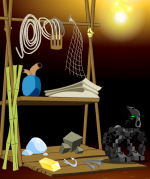 As a result of the effects of the Matoran Spheres, Zemya was reduced in size and strength and also lost his memories of Metru Nui. Shortly after the Matoran arrived on Mata Nui, he took part in the building of Onu-Koro, directed by Turaga Whenua, using materials from the disassembled Airships in which the Toa had brought the Matoran to Mata Nui.[4]

On Mata Nui, Zemya was a Trader who operated a shop in Onu-Koro. When the Cavern of Light was blocked by lava, he could be found in Whenua's hut, explaining to the Turaga that trade was suffering; caravans were being attacked constantly due to the lack of Lightstones, and other methods of travel were equally dangerous. He returned to his work once access to the Cavern was reestablished.[5]

Zemya was evacuated during the Bohrok Invasion, when Gahlok attacked Onu-Koro.[6] He was later rebuilt into a form resembling the one he had had on Metru Nui.[7] Zemya was again evacuated from Onu-Koro when the Rahkshi attacked the village.[8]

After the defeat of the Rahkshi, Zemya helped in building Boats for the voyage to return to Metru Nui, which had been rediscovered.[9] Upon arrival, he and the other Matoran began work rebuilding the dilapidated city. He temporarily stopped his work of reconstruction on order of Jaller, to force the Turaga to reveal where the Toa Nuva had gone, but he eventually got back to work.[10]

When the Great Spirit Robot was gravely damaged in the Battle of Bara Magna, Zemya departed along with other Matoran who had survived the occurrence to live on Spherus Magna.[11][12]