"Pooling their energies, the six villagers... become one!"
— Narrator, Challenge of the Rahi

A Matoran Nui is a powerful being created when six Matoran fuse their bodies and minds. The Matoran who combine must be of six different elements,[2][3] and a great deal of energy and focus is needed to merge.

A Matoran Nui was formed on Metru Nui when the Toa Metru were attacked by thorn-flinging Morbuzakh vines while going to the Morbuzakh King Root's lair in the Great Furnace. Seeing them struggle to defend themselves, Tehutti recalled something he saw in the Archives and suggested that the six Matoran (Ahkmou, Nuhrii, Vhisola, Orkahm, Ehrye, and himself) should focus on their unity. The Matoran were engulfed in a glow, which faded to reveal a Matoran Nui. Charging through the barrage of thorns that were impeding the Toa's progress, it smashed the door to the Great Furnace's inner chamber, urging the Toa to go on. Once the Toa escaped the room, the Matoran Nui, exhausted, left the Great Furnace and split into the six Matoran.[4]

Another Matoran Nui was formed when Jaller, Macku, Hewkii, Kongu, Matoro, and Onepu were heading to a disk-throwing championship on Mata Nui. Macku, scouting ahead, spotted a Nui-Jaga wearing an Infected Kanohi. Matoro suggested that they get the Toa, but Jaller dismissed the idea on the pretext that the Toa had the welfare of the whole island to care for. Kongu then proposed an idea: to lure the Rahi into a trap. It worked, but the Nui-Jaga began to break free. The Matoran then focused their energies, becoming the Matoran Nui, and it hurled the Nui-Jaga a great distance away. After that, the Matoran Nui separated once more into six Matoran, and the Matoran congratulated one another on their unity.[5]

Matoran Nui have great strength and speed, slightly greater than that of a Toa.[citation needed] Possessing incredible strength, a Matoran Nui is able to smash reinforced metal,[6] sustain heavy assault,[citation needed] or pick up heavy objects, and throw them a long distance.[5] Like Matoran, it possesses no elemental powers.[7] 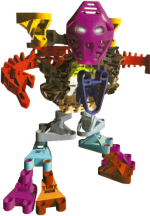 A Matoran Nui in set form

The Matoran Nui that appeared on Mata Nui could be built out of the six Matoran sets that were released as toys in September 2001 McDonald's Happy Meals: Hewkii, Onepu, Macku, Jaller, Kongu, and Matoro. One could hurl a Bamboo Disk from the model's right arm by pulling back the arm and releasing it, just as could be done with the individual components of the model.