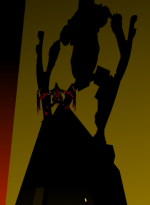 The animation starts with a view of Metru Nui and Ta-Metru. The phrase "A busy Matoran is a happy Matoran," followed by "Quick work is good work," appears while a group of Ta-Matoran are walking in a row. One Matoran, wearing a red Rau, suddenly looks upwards, and sees that a Vahki Nuurakh was watching them from above. A technical overview of his weapons is shown, and the Nuurakh runs towards the screen, with the words "to serve and protect Turaga Dume" behind him.

Ga-Metru is shown, both as a flash animation and as an image from the second full-length movie. A Ga-Matoran wearing a Hau is shown walking through an entrance, but is taken by surprise when a Vahki Bordakh arrives and uses its Staff of Loyalty. The Matoran turns into a slave of the Vahki, and the phrase "trust in Turaga Dume" appears on screen. As the enslaved Matoran keeps on walking, more Bordakh are shown to be watching her, with the phrase "Pride in the elite" appears next to them. The Matoran finally arrives to her destination and opens a door. Inside the room, three other Ga-Matoran are shown to be studying a Kanoka disk. As it turns out, the Bordakh were actually hypnotizing the Matoran so that she could tell them where the room was located. The Vahki jump into the room, and the animation ends.

Vorzakh jumping from the hive

Le-Metru is shown, with many Matoran going through chutes and countless aircrafts flying around. A Vahki Vorzakh suddenly emerges from a hive; the words "For peace and the law" appear as the Vahki lands. The Vahki chases after a Matoran, which in turn escapes by going into one of the chutes. The chute sends him flying away, but as the Matoran turns his head, he sees that the Vahki is still following him. A Kanoka disk is formed inside the Vahki's mouth, which the Vorzakh shoots at the Huna-wearing Matoran. Explosions are seen from outside the chute. Finally, the Matoran arrives at the end of the chute, but sees that the Vahki is still on his tail.

In Po-Metru, a Matoran wearing a Miru is shown walking on a bridge. Suddenly, another Matoran runs to the other side, bumping into the first Matoran on the way. As the Matoran wonders what made him run so fast, there is an explosion behind him. From inside the smoke come a group of Vahki Zadakh, and the Matoran backs away. As the Zadakh are shown running after the Matoran, the words "Might makes right" appear. The Matoran with the Pakari continues escaping, until he reaches a cliff and the Vahki catch up with him. The words "To serve and protect Turaga Dume" appear behind the lead Zadakh.

A large construction is shown, starting from just above the ground until it reaches all the way down to the Archives below ground. A Vahki Rorzakh, who is apparently shut down, appears. An image of an Onu-Matoran is generated in its mind, as well as a map that shows the location of the Matoran. The Rorzakh's eyes light up, with the phrase "Turaga Dume sees all" appearing above the Vahki. The Rorzakh, along with two others, are walking towards the location of the Matoran, and the phrase "Thoughts can be dangerous" is shown. The Vahki slam a door open, and the Matoran is inside the room. The Vahki slowly walk towards him, until they finally corner him so that he can not escape.

A lone Ko-Matoran is shown walking around Ko-Metru, passing various ice crystals on the way. A Vahki Keerakh appears as a reflection on these crystals. Even as the Ruru-wearing Matoran keeps on walking, he is still unaware that the Vahki is actually stalking him. The Matoran turns around, just as the Vahki runs away from sight. The Matoran, realizing something is wrong, runs away, and the words "Obedience is happiness" appear. The Vahki is finally shown at the top of a Knowledge Tower emitting steam, and the animation ends.