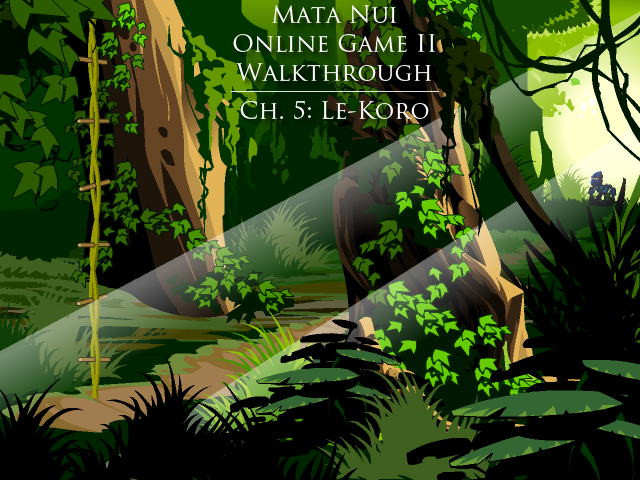 As Hahli departs from Ko-Koro along the rocky path, she notices another path beside it that was not visible before. Following it, Hahli eventually arrives at the outskirts of the jungle of Le-Wahi. Hahli enters the jungle and discovers a simplistic ladder made of vines and branches trailing along the jungle floor. She climbs it and passes through a natural arch in the tree into the Le-Koro Town Square. There are two Le-Matoran here, but Hahli continues straight towards an adjacent tree attached to the main square by a bridge made of wooden planks. Entering a hollow in the tree, Hahli discovers a brightly lit chamber with yet another smaller tree with vines dangling from it growing inside the larger tree’s trunk. A figure at the smaller tree’s base turns to speak to her.

“Welcome, water-lady!” he says. “Long is the groundpath from seabright Ga-Koro to deepwood Le-Koro. Take rest here if you tire, for you shall need it. Kongu and Tamaru have practiced long and hard, and are ready to face you at the Kolhii Tree.”

“I am Matau, Turaga of Le-Koro,” he replies.

“Deepwood Le-Koro is town of leaf and branch, home of highflying Windriders!” Matau exclaims. “Hear you, the wind in the trees? It is jungle-song. Hightree whispers are the flute of Virtue!”

“As other Turaga, so speak I of Mata Nui’s care, and things both forward and back,” Matau says. “Listen well to the song of the forest, and to its singers Makani and Sanso.”

“As Ga-Koro sailors ride waves by seacraft, in boat and under sail: so Le-Koro pilots sail clouds, on Gukko wings!” explains Matau.

Hahli returns to the town square where the two Le-Matoran can still be found. Hahli approaches the Matoran wearing a green noble Kanohi Matatu first.

“I am Makani the musician!” he replies.

“With song we honor the Virtue of Le-Koro!” Makani replies.

“Listen and heed the Virtue sung by Mata Nui to Le-Koro!” Makani elaborates. “Who can walk silent in the Wood? Taku-cry and Fikou-chirp, windhorn and trunkdrum, all around is the ceaseless junglesong, dawn, highsun and night! To unite their voice with this music is the duty of all Le-Matoran. In Le-Koro our song praises Unity and Destiny, and from this comes our Principle!”[note 1]

“Seek sing-song Sanso to learn of our principle!” Makani advises.

“Goodbye,” Hahli smiles at him.

Now Hahli approaches the other Matoran.

“Hello, Ga-Matoran,” he greets her. “Are you here to play us in Kolhii? Kahu and Taku sing of your coming!”

“I am Sanso the musician!” he answers.

“It is a song of Faith!” Sanso declares.

“In Le-Koro we live our lives according to the principle of Faith,” the Matoran explains. “Faith is what holds aloft the feet of our leaf-runners! Faith is the wind that lifts our Gukko-riders from the trees! Faith is the hand that guides our discs to their marks! Without Faith, no Le-Matoran could sail the skies, or run across the treetrops.”

“From the principle of Faith comes our skill. Talk to Tamaru, for he knows more of it!” Sanso advises.

Now Hahli investigates the contents of two huts attached to branches on either end of the town square. In one, a Le-Matoran Trader named Tuuli is selling his wares.

“Welcome to my shop!” he says courteously. “If you see anything you like, let me know. Also, I buy Bamboo Poles, Rope, Sailcloth, Nets, Rigging, Ore, Protodermis, Lightstones, and Bladders, if you have any.”

In the other hut, another Le-Matoran turns to address Hahli.

“Welcome, Hahli of Ga-Koro,” he says. “Tamaru and I are ready to face you on the Kolhii field, whenever you are ready!”

“Highfly pilot Kongu!” he introduces himself. “All Gukko pilots are under my command.”

“Boreas, Taiki, Vira, Shu and Orkan are on patrol by my order!” Kongu explains.

Before she returns to the town square, Hahli spots a small item on the floor of Kongu’s hut. Discovering it to be the Charm of Faith, she places it in her satchel.

Climbing a third branch off the town square, Hahli arrives at a vine dangling from the upper levels of the village. She ascends the vine until she reaches a platform made of stretched fiber near which a hut is suspended. Hahli enters the hut and a Le-Matoran turns to speak to her.

“Hello, Ga-Matoran. It is a long road from Ga-Koro,” he comments. “Are you here to trade?”

“I am Kumo the crafter!” he replies.

“I make Throwing Discs,” Kumo explains. “If you bring me 5 Bamboo Wood, I can make a disc for you.”[note 2]

Taking him up on his offer, Hahli trades some of her Bamboo Wood for Throwing Discs. “Great, here you go,” Kumo says, handing them to her.

Hahli returns to the platform and crosses a short bridge of wooden planks to get to an adjoining platform. This platform has a vine leading downwards and a branch attached to it leading toward another tree, to which the branch is attached. Hahli walks along this branch until she arrives at the tree, where a Le-Matoran is waiting.

“Hello, Hahli,” he calls to her. “Are you here to play us in Kolhii? Just tell Turaga Matau when you are ready. In the game that comes you must beware our keenshot skill!”

“I am Tamaru, of Le-Koro!” he says. “I am leafrunner and left hand of Turaga Matau. I do not Gukko-fly, though. Instead I tend the Disc Range.”

“Here in Le-Koro our principle grants us great Accuracy,” Tamaru explains. “If you train long and hard, you can gain Accuracy too!”

“I would like to train in Accuracy,” Hahli tells him.

The task, Hahli learns, is to strike a certain number of flying contraptions made in the likeness of Nui-Rama with her Discs within a small amount of time. After training with Tamaru for a while, she says, “Goodbye.”

Before Hahli leaves the Disc Range, she notices a small object in the middle of the tree trunk. Discovering it to be the Charm of Accuracy, Hahli places it in her satchel.

Hahli makes her way back to Matau’s chamber in the hollow of the tree.

“I am ready to face the team from Le-Koro,” she tells him.

“Luck be with you and Macku,” Matau says kindly. “Go to the Kolhii tree and I shall call the match.”

After the match, Hahli can hear the Le-Matoran congratulating her and commenting on the game:

“Heartstrong and quick you are, Hahli!” Kongu praises. “I did not think you could best us. Against you our faith was shattered!”

“See this branch upon which we tread?” Kongu asks her. “See the trunks holding our village proud and tall? Faith keeps solid the leaves beneath our steps. But beware the rot that forms deep in the wood… it shatters, splinters, and Fragments. Even stout oak fears Fragmentation. Fragmentation is the enemy of Faith!”

“Ashamed am I, Hahli, that you have beaten us!” Tamaru admits. “But I am glad you have won also. But if you seek skill I can aid you still.”

“Everquick and lucky are you, Ga-Matoran, for you have beaten our best Kolhii players,” Makani says. “I sing a song of bittercheer, for a great game played well but lost!”

“Heartstop and fastbreath you played against us, Hahli!” Sanso exclaims. “It was a marvel to see. This is a song about Kolhii! I sing to honor the people of Ga-Koro and Le-Koro!”

“Keenshot and quickdodge are you, Hahli! Our team was skilled, yet you defeated them,” Kumo adds, before asking, “Is there something I can trade with you?”

Turaga Matau congratulates Hahli last. “Proudstand you should, Ga-Matoran!” he reassures her. “Cunning and trueshot Kongu and Tamaru are, yet you have won the day. Take cheer in treebright Le-Koro, for champion of all Mata Nui you may one day be!”