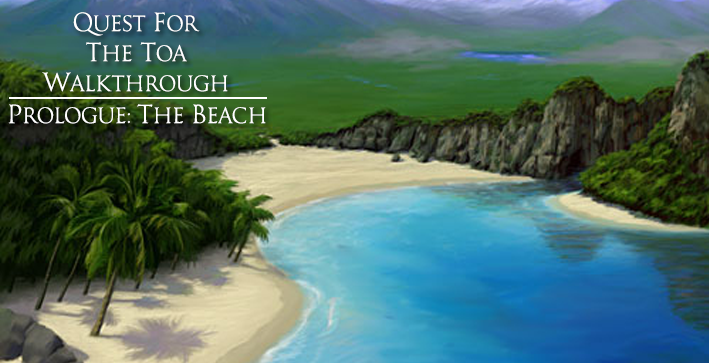 The Legend of Mata Nui

The Legend of Mata Nui told
In the time before time, the island of Mata Nui was a tropical paradise.
Then a shadow fell across the island –
A shadow known as Makuta.
In the dark years that followed, the islanders put their faith in a legend…
…a legend that foresaw the arrival of six mighty heroes: the Toa.
For only the Toa will have the strength and courage to bring peace and light back to the world.
As Mata Nui awaits the arrival of the Toa, a lone islander unknowingly begins a quest…
…a quest that will change Mata Nui forever.

Takua is making his way down the Papa Nihu Reef when he hears a Ta-Matoran running after him.

“Good morning, Takua!”[note 1] the Ta-Matoran says, catching up. “I’ve heard that Turaga Whenua wants to see you. Head up this beach and talk to everyone you see. You’ll eventually come to the cave entrance to our underground village, where you’ll find Whenua!”[note 2]

Takua nods and starts off. As he travels along the beach, he notices a handful of signs warning of beach obstacles and deep waters, many of which he learns he can nimbly leap over. Before he wanders too far, he walks back to the Ta-Matoran to ask why he’d been summoned.

“Hello again!” the Ta-Matoran greets him. “Have you talked to everyone on the beach? You’d better get going! Whenua is looking for you. I’ve heard that Whenua wants to see you.” 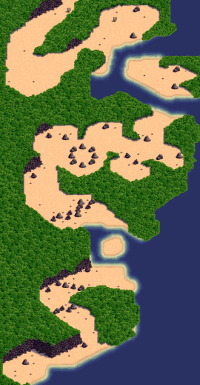 As he is scrambling over rocky outcroppings and jumping over some narrow river tributaries, Takua spots a Ga-Matoran who waves at him. Remembering the Ta-Matoran’s advise about talking to the other villagers, Takua ambles over to her.

“You’re quite the athlete -- I saw how well you jumped over those obstacles!” she smiles. The Ga-Matoran explains that Takua can lift and fling boulders away that are blocking his path, and she demonstrates how. As Takua is starting to feel confident, she gestures in the direction Takua was traveling. “Walk up the beach to see how to fling objects. Bye!”

Further still along the coast, Takua encounters a rugged Po-Matoran who appears to be practicing a good throwing technique. He quickly explains that a proper throw will hurl small objects like rocks, Madu Fruit, snowballs and discs a great distance. Many things can be found and picked up, while fruit could be knocked loose from trees by standing next to them and shaking. “Give it a try!” he urges, gesturing to a nearby tree.

Takua does as he’s directed and throws all his might against the tree, only for several Madu Fruits come loose and hit him in the head. Massaging the pain, he quickly picks up the fruit.

The Po-Matoran nods approvingly, noting how large Takua’s pack is, well-equipped to contain many weapons and tools. He returns to his practice, adding, “Now that you’ve learned the basics, head up the beach for some extra training.”

Takua hurries in the direction the Po-Matoran has indicated. True enough, he quickly finds more Matoran hiding behind rocks and throwing Madu fruits at each other. When he relates that the Po-Matoran sent him, the Matoran quickly agree to help him practice, running and hiding between rocks as Takua tries to hit them.

The game is fun and exhausting, and Takua plays it a few times with the villagers. Once he’s satisfied by his newfound skill, he bids the Matoran farewell and continues along his path. But he doesn’t get very far, for he the path dead-ends in a long, deep river mouth. Takua hurries back to the group of Matoran to see if they can help him cross. One of them comes up to him and leads him over to the water.

“Excellent work, Takua! You’ve learned a great deal in a short time. Cross water using Hoi turtles as stepping stones. Before you can grab a Hoi turtle, you have to startle it. Startle a Hoi turtle by jumping on or throwing an object at it. Walk next to them and pick one up. Now walk over to the stream and throw the Hoi turtle in. Once the Hoi turtle is in the stream, you can jump on top of it. Be quick about it, though - the Hoi turtle may move if you’re not fast enough!”

Following the instructor’s directions carefully, Takua crosses two streams on the Shore Turtles, landing safely on the other side. Waving farewell to the other Matoran, he continues on.

Takua traveling along the beach

The path turns and leads inland, and before long Takua arrives at a solid stone door. Two platforms lie half-hidden in the dirt, and when he tries standing on one, he hears a mechanical clicking beneath him. Together they seem to open the door, but without someone else to stand on the other platform, the door won’t open, much less let him through.

That’s when he spies two hefty boulders lying to the side. These are too heavy to lift or throw, so Takua throws his weight against them, rolling them onto the platforms. As the second one glides to a halt, the door slides open.

Inside the gate, an Onu-Matoran paces anxiously. As Takua walks in, his face brightens. “Whenua is waiting for you, little one. He has a matter of great importance to discuss with you. Enter the cave ahead to visit Onu-Koro, our underground village. Good luck!”

True enough, the path narrows and ends before a yawning cave. Outside he finds a Bula Berry that restores his health and a Vuata Maca Fruit that renews his energy. Hopefully he will find many more on the journey to come, for he will no doubt need them.

Taking a deep breath, he descends into the tunnel.

Quest for the Toa Walkthrough Chapter 1 →