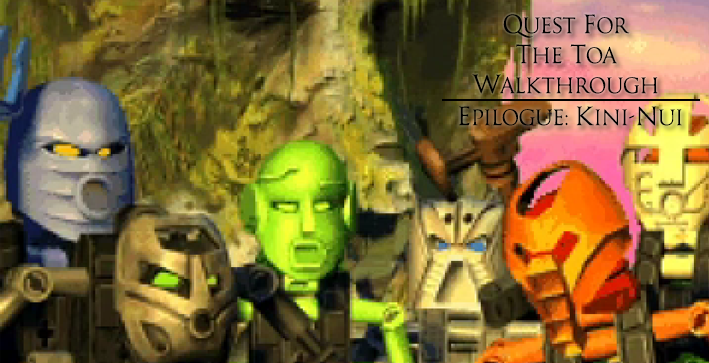 By the time Takua and Turaga Vakama emerge from the jungle and climb the stone steps to the temple of Kini-Nui, the Matoran is actually surprised to see five other dark forms already present around the suva. Indeed, it seems the Turaga of the other Koro have traveled to meet them.

Upon seeing the new arrivals, Turaga Onewa grins. “Thanks for dropping by, Takua!”

Nokama smiles gently. “You are our hero, little one… you have recovered the Toa Stones!”

“Hmph! I guess you did. Not bad for an amateur…” Vakama snorts.

Takua quickly retrieves the bundle from his back. Not only did he recover the Toa stones but each Turaga’s staff as well, and he quickly returns each to their owner. Then he produces the stones.

On seeing them, Nuju pipes up in his hoarse voice saying, “Now that the Toa Stones have been returned, we can once more tell the Legend of Mata Nui…”

Whenua nods. “…and prepare the way for the arrival of the Toa.”

The gathered elders step safely away as Takua takes his position. As he places the stones down on six smaller circles in the Amaja-Nui sandpit, they begin to glow with energy, getting brighter and brighter as each additional stone is placed.

The Matoran looks around at the six sources of power surrounding him, and he backs reverently to the center of the ring.

Before the Turaga can do anything, it is too late. A massive beam of rainbow-colored energy erupts and shoots up from the sand pit, traveling far into the sky. The beam binds the colors of the elements together—red, blue, white, green, brown, and black. Takua, so close to the explosion, is caught in the beam, which throws him high into the air above the island. The beam’s emittance only lasts a few seconds, but is enough to send the Matoran villager shooting so very high.

Takua falling to the Ta-Wahi Beach

Then gravity takes hold. He plummets back down, down toward the island of Mata Nui… until he slams into the Ta-Wahi Beach. By some miracle the sand affords enough padding to form a safe, if agonizing, landing. The impact is so great it can be heard for far around and makes a small crater in the sandy beach.

Takua crash-lands on the beach

As his consciousness dims and his vision turns to black, he is vaguely aware of a large, polished canister drifting up to the shoreline.

Then Takua’s mind and memory fade into nothingness…

← Chapter 6 Quest for the Toa Walkthrough