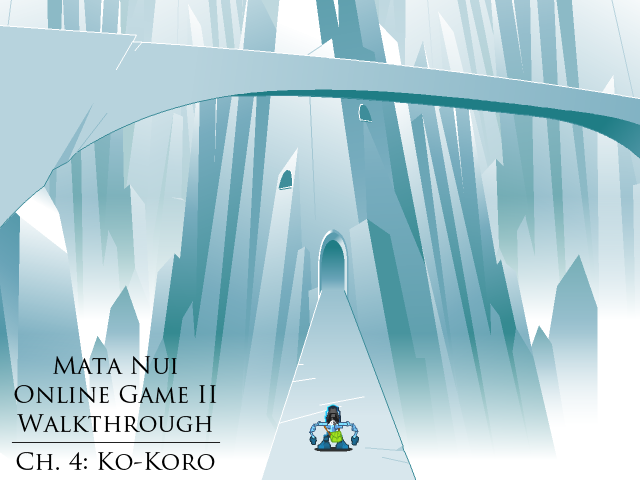 Hahli returns to the central crossroads of the island of Mata Nui. This time she takes the path to the right of the Onu-Ga-Koro Pathway, heading towards the snow-capped mountains of Ko-Wahi. Beside the path, a sparkling lake reflects the tall mountains in the distance. The path starts to climb into the mountain itself, carved into the uneven rocky terrain. Vegetation becomes more and more sparse and a cold wind starts to pick up as Hahli reaches the end of the path. A rope ladder appears to be the only way up, so Hahli climbs it to the top. The ladder leads her up to a snowy ledge where the path continues. Finally, Hahli arrives at an icy plateau with a gate guarded by two Ko-Matoran. When she approaches the two of them, neither speaks. “…”

“I am a temple guard,” one, named Talvi, replies. The other, Pakastaa, gives the same response.

The Matoran do not return her “Goodbye.” They instead look at her blankly. “…” They certainly don’t stop her, however, so she passes through the gate.

She enters onto an icy courtyard with several rope ladders dangling from upper levels and doorways and windows carved into its walls. Directly ahead, a large temple-like ice structure looms. Hahli makes her way along the narrow icy path and enters the temple. Inside, three Matoran are studying writings on the many pillars supporting the structure. Ignoring them for the moment, she continues to the end of the hall, where two figures stand in quiet contemplation near a towering ice pillar. Hahli approaches the taller of the two first.

“I don’t understand,” she admits.

“Clack click Matoro. Toot whir clack clack!” he gestures to the other figure, a Matoran. Hahli turns to him next.

“Welcome, Hahli, to Ko-Koro and Mount Ihu,” he says. “I am Matoro. You are here to defeat us in Kolhii. Nuju bids you take comfort here.”

“Turaga of Ko-Koro,” Matoro explains. “He has transcended our speech, so I speak for him. Is there something I may ask him for you?”

“In Ko-Koro we contemplate the Destiny of Mata Nui and all its people,” he explains.

“The Architect spends much time meditating on the Virtue of Destiny,” Matoro suggests.

“Ko-Koro is cradled in the slopes of Mount Ihu, highest of Mata Nui’s peaks,” Matoro says. “On Mount Ihu nothing grows and nothing changes. The mountain is perfectly at Peace.”

“All Ko-Matoran strive to reach a sublime state of Peace,” he elaborates. “The Trapper has attained the greatest level of this discipline. He may speak of it, if you ask.”;

“Who do I play against?” Hahli asks.

“I am sorry, but his language has become too difficult for me to comprehend. I do not know what he means by this,” admits Matoro.

“Goodbye,” Hahli says as she turns to leave.

“Be at peace, Ga-Matoran,” the Ko-Matoran says as he and the Turaga return to their contemplation.

Before Hahli leaves the Sanctum, she speaks to each of the Ko-Matoran studying the Wall of Prophesy. All of them contemplate in total silence. “…”

“Who are you?” Hahli asks the first, whose name is Jaa.

“I am the Scribe,” he replies. “I copy Nuju’s translations of the Wall of Prophesy.”

The scribe does not return her “Goodbye,” as he resumes his work. “…”

Hahli turns to the next Matoran, Lumi.

“I am an Acolyte,” the Matoran replies. “I meditate on Mount Ihu’s Anger.”

“The Mountain knows rage,” he explains. “When it is angry the snows hurl from its peaks, and crash down in a terrible display. That is why we meditate on Peace in Ko-Koro.”

“Peace opposes Anger,” the Acolyte states. “If we are at peace, the Mountain is at peace. If we anger, the mountain angers.”

Then, the Ko-Matoran is silent, similarly not bothering to return her “Goodbye.” Instead he regards her stoically. “…”

“I am an Adept,” he answers. “We decipher the Prophesies from the Wall.”

“The Wall of Prophesy,” the Adept replies.

The Wall of Prophesy.

“Do you wish to know the future?” he asks her.

“Think carefully,” the Ko-Matoran cautions. “Your future holds happiness and pain. Do you really wish to look into it?”

“Tell me of Happiness,” she tells him.

“You shall unite Mata Nui and bring light to its darkest hour,” the Adept declares.

“The one you love shall be destroyed!” he exclaims.

The Adept actually says, “Goodbye,” when she does. He turns away to continue his work.

Hahli leaves the Sanctum and returns to the Ko-Koro courtyard. In a small ice chamber off the courtyard, a Ko-Matoran Trader named Kokkan is selling and buying wares. He does not say much, but compared to the others so far, he greets her warmly.

“Welcome to my shop!” he says. “If you see anything you like, let me know. Also, I buy Bamboo Poles, Rope, Sailcloth, Nets, Rigging, and Bladders, if you have any.”

Presently she does not need anything, so Hahli heads out.

The Ga-Matoran quickly climbs the ladder to the right of the village gate and arrives at an upper level with entrances to two dwellings: one at ground level, the other up a short ladder. She enters the dwelling at ground level first. Inside is a Ko-Matoran known as Kopeke. He regards her blankly. “…”

Hahli shifts on her feet. “Goodbye,” she says awkwardly, as she steps out of the cave.

She climbs the short ladder to the other ice cave, in which another Matoran named Jaatikko is quietly standing. “…”

“I am the Architect,” he replies.

“I look at a snowflake, I see a monastery,” the Ko-Matoran says. “I look at the snow, I see Destiny.”

“You shall unite Duty and Destiny,” the Architect tells her. “You are the bringer. You are the Snowflake on the Mountain. Here is Destiny’s Charm, symbolizing all that will be, as comes from all that was.” As he says this, he hands Hahli a small object, the Charm of Destiny. She places it in her satchel.

Ice caves built into the walls of the village.

Like many of the other Ko-Matoran she has met, the Architect remains silent. “…”

Hahli leaves the cave and travels across a precariously thin ice bridge over to the other area of Ko-Koro’s upper levels. Here, like before, two more entrances are carved into the wall, with one on ground level and the other up a short ladder. Hahli enters the cave on ground level first. Inside, she meets a Ko-Matoran named Arktinen. “…”

“I am the Icesmith,” the Matoran replies.

“Can you make something for me?” she asks.

“If you bring me two Nails, a Bamboo Pole and some seaweed, I can make a flag,” the Icesmith tells her.[note 1]

The Ga-Matoran trades the required items, and the Icesmith fashions several flags for her, saying, “Alright, just give me a second… There you go!”

“Goodbye,” Hahli says brightly as she takes the items and heads out.

The trader bows his head politely. “…”

Climbing up the ladder into the last ice cave, Hahli meets yet another Ko-Matoran, this one named Toudo. He looks at her. “…”

“I am the Trapper,” he replies.

She resists the urge to break the silence. “…”

“I am at Peace,” the Trapper answers.

“From Destiny comes Peace,” the Matoran explains. “To know Destiny, you must know Peace. To be at Peace, you must control your Will.”

“Have you ever been to the Wastes?” he asks her.

Hahli planting a flag in the Wastes

“There is a Hermit who dwells there. He knows of Willpower,” the Trapper explains.

“He dwells by the Ice Floe,” he tells her. “To find your way in the Wastes, you must use Flags, or you will be lost forever. Plant one in the snow wherever you go, so that you may find your way back again. But beware, for the Mountain will keep them, and snow upon them, and they will be lost. So do not tarry.” The Ko-Matoran hands Hahli a Charm, the Charm of Peace. “Take also this Symbol,” he says. “It represents Peace. Meditate on it often.”

“Goodbye,” Hahli says. The Matoran does not answer, perhaps having already re-entered a meditative state. “…”

Hahli climbs down a nearby rope ladder and finds herself back at the Ko-Koro courtyard. With the flags that she has acquired, Hahli returns to Nuju’s Chamber of Prophesy. To the left of Nuju and Matoro, there is a small section of the wall that resembles a doorway. Pressing a button in the middle of the panel, Hahli discovers a portal to a long icy tunnel.

She follows the tunnel until it leads out into a snowy plain, the Wastes. As she moves further and further away from the tunnel entrance, the storms increase in intensity. At each new area of the Wastes that Hahli travels to, she places a flag in the snow so that she will be able to find her way back. After wandering in the Drifts for some time, the storms abate a bit and Hahli finds herself at the edge of an icy precipice. Nestled in a pile of snow near the very edge is a small object, which Hahli discovers to be the Charm of Willpower. She places it in her satchel.

She continues to explore the Drifts until she discovers a small clearing where the storm is less intense. In the middle of the clearing, there is a small ice hut surrounded by large spiky ice formations. Hahli enters the hut and discovers a Ko-Matoran inside.

“Hello, Hahli,” he greets her unexpectedly.

“I have been expecting you,” the hermit Kantai replies.

“If I am at peace, I can know Mata Nui’s Will,” he explains. 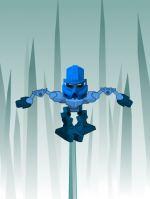 “The Will is the greatest power you can master,” he states.

“To possess great Willpower is to be always aware,” the hermit says. “I can help you understand Willpower, if you wish.”

“I wish to know Willpower,” she tells him.

“Very well,” he nods. “I shall set you upon the Ice Pole. If your mind is clear and you are at peace with the world, your Willpower shall hold you steady. Let Anger fade from your mind. Let Peace fill your thoughts.”

The Hermit places Hahli on the Ice Pole where she finds she has to balance her weight so that the pole remains perpendicular to the ground. If Hahli leans too much to one side, she has to flail to steady herself. But she overcompensates and loses her balance. She asks the hermit to try again.

“Very well. Take your stance on the Ice Pole. Let Anger fade from your mind. Let Peace fill your thoughts.”

Slowly but surely she masters the skill and maintains almost perfect balance. In time she becomes skilled and masters her Will.

“Goodbye,” Hahli says to him as she re-enters the Wastes.

“Goodbye, Champion,” the hermit calls after her, uncharacteristically for a Ko-Matoran.

Using the flags that she has planted, Hahli navigates her way back to the tunnel leading to the Chamber of Prophesy. There, she approaches Matoro.

“I am ready to face the team from Ko-Koro,” she tells him. After a quick word with Turaga Nuju, Matoro turns to Hahli.

“He says he shall call the match,” the Ko-Matoran says. “We will arrange for your teammate to meet you. Go to the Kolhii field, and all will be resolved.”

Hahli travels to the building marked ‘Ko-Koro Kolhii Field’, which she reaches by climbing down the ladder on the edge of the courtyard and heading toward the field located at the base of the Sanctum. There, she challenges the Ko-Koro Kolhii Team. She and Macku are victorious.

Most of the Ko-Matoran are silent after the match’s outcome. “…”[note 3]

Only Turaga Nuju, translated by Matoro, speaks to her: “As it is written on the Wall of Prophesy, so it is echoed in Mount Ihu’s drifts. Your victory over Ko-Koro was prophesied. Nuju says you have done well, Hahli.”[note 4]