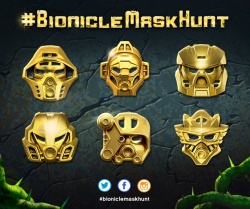 The Bionicle Mask Hunt (advertised primarily as the hashtag #BionicleMaskHunt) was an online competition hosted by LEGO that had participants try and find mask-shaped designs in everyday objects and settings. The prizes for the contest were six solid gold versions of the Golden Masks of Power.

The assignment for the competition was to find shapes and patterns that resembled Masks of Power, with color schemes matching the six elemental Masks of Power wielded by the Toa. Pictures of those patterns were then uploaded and judged by the team.

Beginning on March 30th, 2015, the competition ran for six weeks, ending on May 10th. Every week, six "weekly winners" were chosen from among the entrants, with the final grand prize winners being selected from amongst the 36 total weekly winners.

Every participant needed to include the hashtag #BionicleMaskHunt in order to be considered eligible.

Each of the six final winners had received one 14 karat real Gold Mask.