"The army’s goal had been to find and capture the long-lost Masks of Power, and conquer Okoto’s six elemental regions so the spirit of Skull Grinder’s master could rise and rule the entire island."
— Narrator, Escape from the Underworld

The Skull Army was a force of villainous undead beings, under the leadership of Kulta, the Skull Grinder. They aimed to find and destroy the Masks of Power, a directive imparted to them by the former Mask Maker Makuta.

Thousands of years prior to the arrival of the Toa, during the time of the Mask Makers, the island of Okoto was plagued by invaders known as the Skull Raiders. The Skull Raiders were eventually repelled underground by the Mask Maker Ekimu and his brother Makuta, though Makuta secretly betrayed Ekimu and forged an alliance with the Raiders to form an Army when he next called.

Many years later, Makuta's treachery was exposed and he was defeated in the Battle of the Mask Makers. His dark spirit was eventually able to return to the island and contacted the Skull Raiders leader, Kulta. Kulta left his underground confinement and began raising an army of undead creatures. 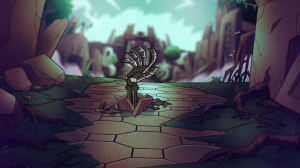 A Skull Creature rising from the grave

Inside the ancient City of the Mask Makers, Kulta, the Skull Grinder - also under the command of Makuta - used his dark powers to animate a series of undead creatures: Skull Slicer, the Skull Scorpios and the Skull Warriors. Kulta set them as guards and sentries, and claimed the Mask of Creation from the city's entrance.

When the Toa gathered at the City of the Mask Makers with the intent of reviving Ekimu, the Mask Maker, they encountered and defeated the Lord of Skull Spiders. Proceeding into the city, Tahu sprang a trap, and the Toa were attacked by Skull Warriors in a locked courtyard. However, they defeated the Skull Warriors and broke through the doors. Lewa then broke off from the group to explore the Arena, but was ambushed by Skull Slicer, who stole his mask. The Toa challenged Skull Slicer in the Arena and recovered Lewa's mask, sending Skull Slicer plummeting into a pit and destroying the Arena in the process.

The Skull Creatures ambushing the Toa in the Forge

After escaping from the rubble of the collapsed Arena, the Toa emerged into a graveyard, where they caught the attention of prowling Skull Scorpios. One of the Scorpios stole Pohatu's Golden Mask of Stone, and defeated most of the remaining Toa. Lewa lured the two Scorpios to Ekimu's tomb, where he collapsed a monument on top of them, crushing them and liberating Pohatu's mask.

While the Toa succeeded in reviving Ekimu, Kulta headed to the forge of the Mask Makers to destroy the Mask of Creation. Skull Basher remained at the entrance of the forge, guarding against possible intruders. When the Toa and Ekimu arrived, Skull Basher defeated Onua and stole his Golden Mask. Ekimu instructed the other Toa to combine their powers, and by doing so the Toa were able blow past Skull Basher and recover Onua's mask.

Inside the forge, the Toa tried to defeat Kulta, but were outmatched when he donned the Mask of Creation. However, Ekimu was able to remake his Hammer of Power and use it to knock the mask of of Kulta's face, defeating him and thwarting the Skull Creatures' plot. Kulta and Skull Basher were eventually imprisoned in special cells inside Ekimu's forge.

While the Toa were doing this, the Protectors made their way into the underbelly of the city to aid the Toa as needed, where they discovered the Lord of Skull Spiders being taken back to recover from his defeat. They succeeded in bringing down the ceiling, burying the Lord and many of his spiders, before engaging Skull Warriors in the city proper.

Following their successes, the Okotan villagers returned to the City of the Mask Makers to reclaim it, only for the remaining Skull Warriors and Skull Spiders to join forces for an attack. However, the Toa, having been gifted new armor and masks by Ekimu, handily defeated the invaders.

Skull Warriors and Skull Spiders were also seen among Makuta's forces in the Shadow Realm.

The Skull Army was composed under the leadership of Kulta, the Skull Grinder, a fellow Skull Creature. The transparent red armor on the Skull Creatures is a sign that they are under his command.[1] Kulta himself was operating under the influence of the former Mask Maker, Makuta, who was also said to be directing Lord of Skull Spiders and his minions.

One Skull Spider was contained in each of the 2015 first wave sets, with the exception of 70790 Lord of Skull Spiders.

A blue Skull Spider was also contained in 5002941 LEGO BIONICLE Hero Pack. For a limited time, this set was included free with purchases from retail LEGO Stores and the online LEGO Shop.