Gaardus is a former Matoran who was mutated by a group of rogue Nynrah Ghosts.

Gaardus was once a normal Ta-Matoran[7] within the Matoran Universe. Over 80,000 years ago,[8] he was taken and altered by a group of exiled Nynrah Ghosts, who were attempting to make a living weapon. However, he eventually escaped their custody, and began hunting them down until he had killed them all.[9] He remained in the village for a long time,[10] expecting them to be sent back from the Red Star so he could kill them again.[11]

After the Battle of Bara Magna rendered the Matoran Universe uninhabitable, Gaardus immigrated to Spherus Magna, seeking peace away from the Matoran.[15][16]

While he was hunting in Bota Magna, Tren Krom suddenly appeared near him. Gaardus was about to attack him, but Tren Krom's telepathic powers caused Gaardus pain. Another being arrived, and sudden winds blew Gaardus from his perch before Tren Krom was murdered, and he received a telepathic scream from Tren Krom that imparted an image of the Red Star.

Gaardus returned to the trees, but was quickly shot out of the air by Toa Nuva Kopaka, who was investigating a murder with Pohatu and had also sensed Tren Krom's scream. The two recognized Gaardus as an inhabitant native to the Matoran Universe, and Gaardus explained his history. At the mention of the Red Star, Kopaka became intrigued, and sought a way to travel there. Gaardus reluctantly revealed that he could get them there, and was convinced by Kopaka to teleport them into the Star. They soon encountered a group of Kestora, one of whom recognized Gaardus, prompting them to draw their weapons.[10] The Kestora accused Gaardus of being the reason the Star was no longer operational, and Gaardus revealed to the two Toa that this was the reason he did not want to return. After Pohatu disarmed the Kestora, the Kestora began deciding whether or not to keep the group for dissection, and Gaardus teleported to Spherus Magna.[14][6]

As a result of the rogue Nynrah Ghosts' experiments, Gaardus possesses wings which he can use to fly and has great strength as well as enhanced senses.[4] The experiments gave him an extra pair of arms and legs as well.[17] He also has the ability to teleport to places he has been before, and take others with him, given to him to make him effective at hunting. He despises the Matoran who mutated him, and does not consider himself of the species due to the atrocities committed against him.[10] 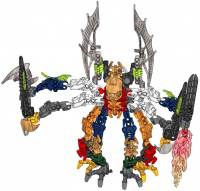 Gaardus as a combiner model