The shared banner for the competition

Battle For The Gold Mask (also known as Battle For The Golden Mask, abbreviated BFTGM) was a multi-website building competition created by The LEGO Group, to celebrate the 2015 return of the BIONICLE line after it had been canceled five years prior. Hosted by five fan-based online groups (including LEGO's own ReBrick social media platform) the competition centered on building a BIONICLE-themed villain. The prize was a 14-karat solid gold version of the Golden Mask of the Skull Spiders.

Five websites were chosen to host the competition, all of them social media based fan groups.

The contest began on October 20th, 2014, and ended on December 1st, 2014. The premise was to build a BIONICLE villain as a counterpoint to the heroic Toa that were introduced.

Each creation was mandated to be at least 75% Technic or LEGO constraction bricks, the kind predominately used by BIONICLE and its related themes. Entrants needed to be members of the site they were submitting it to; multiple entries could be submitted to multiple sites, though ultimately only one would be selected from one site.

Only a single entry out of multiple entries per person was considered. Each site had a first, second, and third place winners, with the first place winners being considered semi-finalists and then put into competition against the winners from each site. The panel of judges for the semifinal round consisted of:

After each semifinalist had been chosen, the remaining six creations were then evaluated by a jury of LEGO professionals, who decided on the overall winner. That panel consisted of:

The entries were judged based on four broad categories: "overall coolness and creativity", "inspired originality", "uniqueness", and "creative use of parts".

Winners of the three places received tiers of prizes: first place was given all six Toa sets, signed by the designer; second place was given three selected "hero" sets; and third place was given one "hero" set. The grand prize winner was given a 14-karat version of the Golden Mask of the Skull Spiders, one of eight solid gold mask variants that were made for BIONICLE's 2015 reboot. 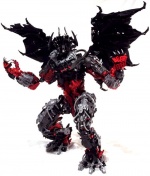 The grand prize winner was BZPower's Breann Sledge (Roa McToa), with her model Akutahn. The judges liked the "detail" and poseability of the final model.