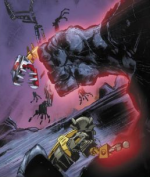 All of the following beings have/had the Element of Stone and/or its sub-powers:

All of the following objects have/had the Element of Stone and/or its sub-powers: