Dekar was a Po-Matoran Aqua Hunter and former resident of Mahri Nui. He was eventually transformed into a duplicate of Hydraxon by the Kanohi Ignika. 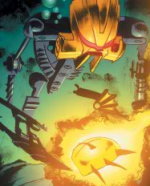 Dekar was initially from the same island as Sarda and Idris.[3] After Lesovikk and his team failed to defeat a tribe of wandering Zyglak, the local Turaga went mad and sent all of the resident Matoran to Karzahni, including Dekar.[4] There, he was rebuilt into a twisted, weaker form by Karzahni himself and given a pair of Electro-Blades to compensate for his new body. Along with several other rebuilt Matoran, he was relocated to the Southern Continent. During the Great Cataclysm, Dekar was on the landmass that broke off and became Voya Nui.[5]

The warlords then attacked the Matoran, causing him to drop the mask. Despite Dekar's protests, Pridak stole the mask and promised the fall of the Great Spirit. As he did so, the mask emitted a blinding flash of light, knocking the present Barraki and the Po-Matoran unconscious.[6] Dekar came to before his captors and left the cave, leaving the mask behind with Pridak. His air bubble thinning, he desperately swam towards Mahri Nui. As he did so, the Mask of Life sensed his weakening life energy and transformed him into Hydraxon, the late jailer of the Pit.[7]

While searching for more escaped prisoners, Hydraxon spotted Nocturn and attacked the escapee. Hydraxon was able to defeat Nocturn, and acquired the Mask of Life, which Nocturn had been keeping. Remembering a faint memory from Dekar, he attempted to blast the mask with his Cordak Blaster, believing it too dangerous to be in the Pit.[8] Toa Hahli redirected the Cordak mini-rocket with a riptide and engaged him in combat. Mantax managed to acquire the Ignika in the midst of the fight. Hahli and Hydraxon attempted to attack the warlord, but were drained of energy by Mantax's curse, and sank to the bottom of the ocean. Mantax instructed them to tell the other Barraki to meet him at the Razor Whale's Teeth.

Later, Hydraxon encountered the Toa Mahri. When he demanded the mask, Matoro offered it and the attached duty to the jailer. Listening to the Toa Mahri's experiences, he eventually agreed to let them go with the Ignika.[9]

After the battle, and the revival of Mata Nui, Hydraxon came across the damaged body of Maxilos.[10] He retrieved the body, now freed from Teridax's control, and took it away in the hopes of repairing it. However, he eventually gave up the task.[citation needed]

While hunting down prisoners, Hydraxon was confronted by Pridak and an army of Takea sharks. The Barraki leader called him a fake, and Hydraxon admitted that others have told him the same. After defeating the Takea and combatting the Barraki, Hydraxon allowed Pridak to tell his story. Pridak explained to the jailer how a Matoran named Dekar had gone missing around the time of Hydraxon's reappearance, and that the Ignika had made a new Hydraxon out of the Matoran, attempting to demoralize him. Hydraxon insisted on his identity and defeated Pridak, jailing the Barraki.[7]

As he and Spinax continued their task to capture the Pit escapees, after capturing Ehlek and Kalmah,[11] Hydraxon was met with assistance from Lesovikk and Sarda. Initially, Hydraxon refused help from them because he thought that the Toa and his Matoran companion were escapee prisoners. However, after realizing they were not, he relented and allied with the duo. Since then, they managed to capture several of the former prisoners, including two of the Barraki and Nocturn.[citation needed]

Shortly afterwards, he received a message from Toa Helryx, ordering him to draft the Barraki in the Order's war against the Brotherhood of Makuta. He showed this message to Lesovikk, alerting the Toa to the Order's existence, and released the Barraki.[12] He then began assisting the Order of Mata Nui in their war efforts.[13]

Although the Order won the war, Teridax still managed to usurp control of the Matoran Universe. When Teridax was finally defeated by Mata Nui, Hydraxon was forced to leave the failing universe.[14][15] Arriving on Spherus Magna, he became amphibious as a result of an energy wave released from the Ignika.[16] 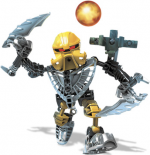 Dekar was a skilled Aqua Hunter. He liked solitude and enjoyed hunting. He was brave, but practical enough to flee if he was losing a fight. He always wanted what was best for Mahri Nui, to the point of attempting to destroy the Ignika.[6]

Hydraxon possesses the same set of abilities as the original, including the combat skills and mental shielding, in addition to the sensitive hearing. He also exhibits the same personality, with a single-minded dedication to the justice of his profession. The Ignika gave Dekar the original Hydraxon's memories and suppressed the memories of his time as a Matoran.[8] While the section of Hydraxon's mind that holds all memories as an Order of Mata Nui member is shielded, the section of his mind that holds his memories as Dekar is not, and is accessible to mind-readers.[17] Despite faint recollections of his time as a Matoran, Hydraxon is oblivious to his origins; even when presented with evidence of his true past, he refuses to acknowledge its legitimacy—including the death of the original Hydraxon—and remains focused on his assigned tasks.[7]

To allow him to function underwater, the Ignika gave Hydraxon the ability to only breathe water and made him immune to the effects of the Pit Mutagen.[citation needed] As a result, he wore a Breathing Helmet to operate in the terrestrial sections of the Pit.[18] He was later granted the ability to breathe air by Mata Nui with the use of the Ignika and has become amphibious.[16]

Dekar was equipped with two Electro-Blades capable of firing a stunning shock. He also wielded an Air Launcher, used to fire spheres of air at water creatures, filling their lungs with air, toxic to them. He also wielded a spear when hunting.[6] When the Ignika transformed him into Hydraxon, these tools were transformed as well.