2007 was the seventh year of BIONICLE sets.

The 2007 sets in a LEGO Club Magazine feature

Set near the underwater realm of Mahri Nui in the Endless Ocean, 2007 utilized an aquatic motif for its sets. Like the previous year, the first wave consisted of the year's villains, this time the mutated Barraki warlords, who bore fearsome visages of sea creatures. Only four small sets were released for 2007: two Matoran, Dekar and Defilak, and two Rahi, the Hydruka Morak and Thulox. These four did not utilize the Squid Launchers, but instead possessed rebranded Zamor Launchers known as Air Launchers.

An exclusive titan set was released after the winter wave, depicting the character Nocturn and using special glow-in-the-dark pieces as well as a Squid Launcher.

After much speculation[1], the summer canister sets were revealed to be the Toa Mahri, transformed versions of the Toa Inika. These Toa came in cardboard packaging with a plastic ring shell, a further departure from the typical canister design. The main Titan sets for 2007, released in the summer, were Hydraxon, Maxilos & Spinax, and Gadunka; the former two both came equipped with Cordak Blasters, while the latter was a Rahi set that carried a Squid Launcher. Unlike previous years, these large sets did not have any combiner models.

Two special edition large sets were also released in the summer; the first, after being outed by a Toys R Us retailer catalog[2], was the Karzahni set, which included the Karzahni character (carrying a squid launcher), two Matoran (Sarda and Idris) and an Underwater Trap, which utilized a spring-loaded action feature. The second was Toa Lesovikk, riding a Sea Sled armed with a Cordak Blaster and featuring fold-out legs. Sales of Lesovikk were originally suspended when it was discovered the set was missing a specific piece (initially identified as a recall[3]), and eventually taken off backorder once the problem was rectified.[4][5][6]

Playsets returned for a final year; there was no exclusive set as in previous years, and two of the three sets depicted scenes that did not occur within the story, though the Toa Terrain Crawler was heavily featured both in the books and comics, as well as the majority of the promotional media for 2007.

Reports emerged in 2007 that the lime joints in the year were extremely brittle, and prone to breaking. This was attributed to an error in the cooling process.[7] 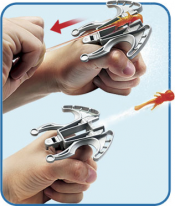 The Barraki each carried a Squid Launcher for launching the rubbery Sea Squids, which also came in accessory packs. These launchers were noted for being difficult to use compared to past projectiles.[8][9] The unique faces and builds of the Barraki was a selling point of the wave[citation needed]; each character had an individualized construction, as opposed to noted "clone" builds of previous waves, where they only difference in characters were the specialized tools and masks. The summer sets introduced a second projectile launcher, the Cordak Blaster, which was a large air pump to fire smaller red projectiles.

2007 was the last year to feature supplemental packs of any kind, in this case the Sea Squids. The packs included colors not otherwise obtainable in the regular sets, but still lacked the collectible aspect.

The year was also notable for special glow-in-the-dark pieces, representing sea creature bioluminescence, as well as rubber elements present in many sets. Kanohi masks, in the same design used since 2004, also returned for the Toa characters; some of these masks came in a two-piece construction, with special visors attaching to the base of the mask.