"Who asked you to save me? Don't you understand? The Makuta accepted me — they had use for me — which is more than my fellow Matoran ever did! I finally found a place where I belonged, and you took it away from me."
— Gavla to Toa Takanuva, The Final Battle

Gavla was created by the Great Beings and tasked with helping in the construction of the Great Spirit Mata Nui. Along with the other Av-Matoran, she labored in darkness to create the islands and locations of the Matoran Universe. After this duty was completed, the Av-Matoran were tasked with the preparation of the universe core, Karda Nui, for the Great Spirit's awakening. When the Av-Matoran suffered attacks from the lightning-like Avohkah, the Toa Mata were summoned to protect them.[5] Gavla later returned to her homeland in the caves below the Southern Continent.

During the earthquake caused by the Great Cataclysm, part of the homeland of the Av-Matoran fell below into Karda Nui, forming the Stalactite Villages. Gavla resided in one of these villages for over a thousand years.

After this thousand year span, Gavla was working with Tanma in adjusting ScareRahi to keep away flying Rahi when Makuta Chirox dropped a Tridax Pod and a Shadow Leech infected her, draining her light. She then had a small conflict with Tanma, whose light had not been drained, and flew off with the Makuta. Makuta Mutran soon mutated Gavla with viruses, giving her wings and talons.

Weeks passed, during which other Matoran had their light drained and the Makuta strengthened their hold on Karda Nui. One day, Toa Mahri Matoro abruptly arrived, donned the Kanohi Ignika in Karda Nui, and restored Mata Nui to life, blinding the three Makuta in the skies of Karda Nui.

In the coming days, the remaining Av-Matoran battled the blinded Makuta, who used Shadow Matoran as their eyes. Gavla became the preferred partner of the silent Makuta, Vamprah. During one of these battles, the Toa Nuva were teleported to Karda Nui, and then aided the Av-Matoran, forcing the Makuta to retreat. While three of the Toa Nuva journeyed to the Swamp of Secrets, Lewa, Pohatu, and Kopaka stayed to help the Matoran battle the Makuta.

After Radiak lured Pohatu and Photok away from the Lightvines surrounding the Av-Matoran village, Kopaka and Lewa joined the battle with their Matoran partners. Kopaka and Solek attempted to battle Vamprah and Gavla, but as Gavla forewarned, Vamprah used his Avsa to drain Kopaka of his energy. Later, when Lewa came to rescue his friends at the cave where they were being held, Vamprah and Chirox came to combat him, aided by Gavla and Kirop. However, the Toa and Matoran escaped.

After the Toa Nuva freed themselves from a trap, Gavla and Vamprah looked for the Toa Nuva. It was Vamprah that found out that the Toa Nuva had found their third Keystone. A massive air-conflict ensued, during which Icarax was devolved back into muscle from his Antidermis, and the Makuta, with their Matoran riders, fled into the swamp, preparing for the final battle.[6]

Gavla was later forcibly cured by Takanuva with a Klakk. Gavla, however, did not want become an Av-Matoran again, for she felt she was better off as a Shadow Matoran.[7]

Under the order of Takanuva, Gavla joined the other Av-Matoran, who fled Karda Nui and traveled to Metru Nui, because she had no other options.[8] There, she celebrated the reawakening of Mata Nui, although the occupants of the Coliseum were soon interrupted by Teridax who announced his rule over the universe.

When the Great Spirit Robot was damaged beyond repair and Teridax was defeated by Mata Nui, he sent a wave of Life energy throughout the planet, which, among other things, reversed the mutations the surviving Av-Matoran received from Mutran.[4] The Matoran of Metru Nui then made a mass exodus to the reformed planet of Spherus Magna.[9][10] 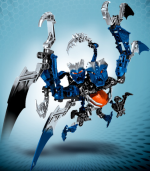 As an Av-Matoran, Gavla has the ability to change how the color of her armor appears. She has been trained to use this ability reflexively, helping keep her elemental affiliation secret. This ability was briefly replaced with shadow powers upon her transformation into a Shadow Matoran, but has since been restored. Gavla can also channel small amounts of Light energy through her hands or tools. She could also access a secondary power while a Shadow Matoran, disrupting an enemy's sense of balance, when connected to a Toa or Makuta.

Gavla, while not inherently evil, lacks the friendship of her fellow Av-Matoran, and as such she is embittered toward them. When transformed into a Shadow Matoran, she battled her former tribe mates willingly because she believed they had wronged her and because she felt valued by the Makuta.[3][11] When Gavla was cured and transformed back into an Av-Matoran, she found herself once again without any friends, and she did not want to return to her original life.[12]

As an Av-Matoran, Gavla wore a noble-shaped Kaukau.[1] She switched to a noble-shaped Avsa[2] while a Shadow Matoran, but she has since returned to wearing her former mask.[13]

As an Av-Matoran, Gavla wielded dual Power Swords and had a rocket booster attached to her back.[6] After she was mutated by Mutran, her blades were attached to her hands, and she gained a pair of wings. These mutations have since been undone.[4]

8948 Gavla was released in early 2008 as one of the six Matoran sets and consists fourteen pieces. Gavla can be attached to Vamprah's back. Gavla's mask features a two-color blend as is the case with all Shadow Matoran masks; Gavla's mask is made of dark blue and silver plastic. Gavla is also advertised to attach to Bitil's back via the Matoran connection feature, although it is just to promote the function and is not used in the story.

"He looked back to see a sight that would haunt him all the rest of his days. It was Gavla ... and yet at the same time, it wasn't. She had changed in horrible ways. Her feet had sprouted claws, and wings had emerged from her shoulders. Her blades had transformed into talons that were fused to her hands ... no Av-Matoran could change shape like that."
— Narrator, Shadows in the Sky

"Gavla acted more like one of those ice-cold Ko-Matoran types. She always had her mask in the air, like she was better than everyone else. As a result, no one really wanted to be around her."
— Narrator, Shadows in the Sky

"You might say I saw the light ... by peering into the darkness."
— Gavla, Shadows in the Sky