On Metru Nui, Vohon lived and worked in the district of Ta-Metru.

He was captured by the Vahki under the command of Makuta Teridax, disguised as Turaga Dume. He was then forced into a Matoran Sphere but was later rescued by the Toa Metru and awakened on the shores of Naho Bay on the island of Mata Nui.[3] 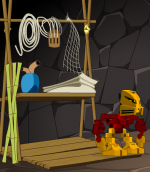 Vohon was physically reduced in size and strength by his confinement in a Matoran Sphere and his memories of Metru Nui were also erased. Vohon participated in the construction of Ta-Koro, supervised by Turaga Vakama, using parts of the disassembled Airships that had been used to transport the Matoran to the island.[4]

In Ta-Koro, Vohon became a Trader, setting up shop off the village square.[5] After the Bohrok-Kal were defeated, he was rebuilt into a form resembling the one he had had prior to his imprisonment in a Matoran Sphere.[6] Vohon was evacuated from Ta-Koro along with the other Matoran during the Rahkshi attack.[7]

Following the Rahkshi's defeat, Vohon helped in the construction of Boats to make the return trip to Metru Nui,[8] and also help to rebuild the city. He temporarily stopped his work of reconstruction on order of Jaller, to force the Turaga to reveal where the Toa Nuva had gone, but he eventually got back to work.[9]

When the Great Spirit Robot was damaged beyond repair and Teridax was defeated by Mata Nui, the surviving Matoran of Metru Nui made a mass exodus to the reformed planet of Spherus Magna.[10][11]