"Some poor villager has been encased in ice! Perhaps I am not too late. I take out the Heatstone to see if I can melt the villager out of the ice."
— Takua's thoughts, Mata Nui Online Game 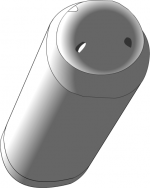 Heatstones are believed to be related in some way to Lightstones, but derive their power from a different source.[citation needed] They were used by beings in the Matoran Universe, mostly Matoran to provide heat in a chamber when using fire is inadvisable. Heatstones were carried in small metal or stone containers to avoid the user being burnt by the intense heat of the material itself.

During the Matoran occupation of the island of Mata Nui, the Ko-Matoran of Ko-Koro used Heatstones while traveling in the inclement Drifts. The Ta-Koro Guard outpost at the North March made use of Heatstones to warm their dwellings. When the outpost was attacked by infected Rahi under the influence of Makuta Teridax, the Matoran were killed and the dwelling ransacked, leaving a Heatstone on the floor of the hut. Later, the wandering Av-Matoran Takua traveled to the North March's outpost and recovered the Heatstone. He used it to free the Ko-Matoran Kopeke who was trapped in ice by the Makuta's Rahi. Takua kept this Heatstone with him until he arrived in the Bohrok Nest adjacent to Mangaia, at which point he tossed the stone out of his satchel in desperation while searching for his Po-Koro Chisel.

When the Onu-Matoran Onepu, Taipu and Nuparu were trapped in a cave of Onu-Wahi during the Gahlok invasion of Onu-Koro, Nuparu incorporated a Heatstone that he had been carrying in his backpack into a welding device which he used to create the Boxor vehicle.

When the Matoran immigrated to Spherus Magna after the destruction of their universe, they did not bring Heatstones with them.[1]