"When I shine light upon it, it points toward the spot from which the Great Spirit can be awakened."
— Toa Takanuva, Takanuva's Blog

The Great Sundial was a mysterious object on Mata Nui.

The sundial was not discovered by the Matoran until 1,000 years later, when it was exposed during Onu-Matoran excavations in Shaft B of the Great Mine. The Prospector who uncovered it recognized its astrological markings and sketched them onto a tablet.

The chamber beneath the sundial

When Takua visited Onu-Koro, a Prospector took the opportunity to ask him to deliver the tablet to the Ga-Koro Astrologer Nixie for her opinion. She speculated that an earthquake had caused the sundial to fall beneath the earth. She also noted that it had an indicator at four o'clock, a marking not shared by any other sundial. Nixie offered Takua a Gnomon that she found in the foothills of Mount Ihu to see if it fit in the center of the sundial. When Takua returned to the Great Mine, he used his Lightstone to imitate sunlight and make the shadow of the Gnomon fall upon the four o'clock marker. This activated the sundial, whose markings lit up and disappeared, while its center dropped away to form a spiraling staircase downward. At the bottom was a chamber with a mysterious Golden Kanohi and the word Rahi floating above a pedestal.[2]

After the Battle for Kini-Nui, the Golden Kanohi disappeared, and the passageway to Mangaia opened. At Turaga Whenua's suggestion, Takua traveled down the staircase and pressed a newly-exposed button on the pedestal. This caused the floor of the hidden chamber to rapidly descend, carrying him into Mangaia to witness Makuta Teridax's defeat at the hands of the Toa Mata.[3]

During the preparations for Mata Nui's Reawakening, a voice told Toa Nuva Lewa to retrieve the sundial and place it in the Archives.[4] Brutaka recovered the sundial, used a Kanoka of Shrinking to shrink it,[5][6] and gave it to Krakua, who in turn gave it to Takanuva before he began his journey to Karda Nui.[7] He then used it to locate the Codrex.[8][9]

Afterwards, the Order of Mata Nui took the sundial back from Takanuva and held it on Daxia.[10]

The Great Sundial can be used to locate the Codrex: when light shines on the sundial, the resulting shadow points in the direction of the structure.[9] As part of the hidden entrance to Mangaia, the sundial could be unlocked if the shadow of its gnomon was cast on the 4 o'clock section.[2] The face of the sundial is divided into 18 sections that represent the 18 hours of daylight on Spherus Magna.[citation needed] 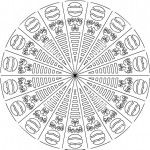 The markings on the sundial