"Go on, there must be more."
"I think it's your turn. As you said, it is my job to write histories. I would like to know yours."
— Karzahni and Hahli, Dark Destiny

A Chronicler is a Matoran occupation which requires that a Matoran travel across their land and record certain events.

The office of Chronicler existed on Metru Nui. The only known Chronicler of Metru Nui before the Great Cataclysm is Kodan, who held the post at the time of the Toa Mangai. His first record was carving down the event of the Kanohi Dragon incident. He was sent with some of the Toa appointed to close the Sea Gates of Metru Nui, but never came back. After he died, no one was appointed to replace him.

The office of Chronicler was abandoned after the exodus to Mata Nui. However, one thousand years later, the need for a record-keeper arose again, and Takua was appointed shortly before the Toa Mata defeated Makuta Teridax. After many events, Takua was transformed into a Toa, thus a new Chronicler was appointed: Hahli. She chronicled the many events of the past and the rebuilding of Metru Nui, but, eventually, she also became a Toa. Kopeke was then chosen to become the newest Chronicler, and recorded the saga of the Toa Inika-turned-Toa Mahri, including Matoro's sacrifice. 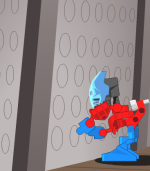 The exact details of the Chronicler's duties are vague; apart from recording events, they apparently bring news from village to village (or district to district, if needed).

After the defeat of the Bohrok-Kal, a new duty was added to the Chronicler's duties: to update the Wall of History. The Wall, located in Ta-Koro, detailed all the prominent events in the history of the island of Mata Nui.

Chroniclers carry a tool known as the Chronicler's Staff, which they can use to carve on the Wall of History.