Cordak Blasters were originally designed and manufactured on Xia.[2][4] The Xians sold these weapons to anyone who could pay for them.[5]

The Order of Mata Nui acquired many blasters for Hydraxon to use in case of escape attempts from the Pit.[6][7] Hydraxon equipped all the Maxilos robots with one to assist in guarding the Pit. The Order of Mata Nui also stole some blasters that the Dark Hunters bought from Xia and stored these weapons on Voya Nui. When Mahri Nui sank, these blasters disappeared into the sea, and the Barraki retrieved them.[2]

At some point prior to his arrival in the Pit, Lesovikk obtained a Cordak Blaster, which was mounted on the Sea Sled.[8][9]

The Toa Terrain Crawler and the Stinger Whale were each equipped with a giant Cordak Blaster,[10] the latter of which was retrieved by the Matoran of Mahri Nui from the waters of the Pit.[11]

The Barraki stole many blasters from the Pit's armory during their escape.[3][12] Later, the Toa Mahri discovered the blasters while exploring a cave and took all of them for their own use.[13][14] Karzahni also took some and armed a number of Manutri with them to create a strike force.[15]

After the Toa Mahri successfully revived Mata Nui, they returned to Metru Nui, where one of their mini-rockets was reverse-engineered. The Matoran in the city then manufactured them for the Toa's use.[16][17]

When triggered, a propulsion mechanism launches each of the Cordak Blaster's six mini-rockets[3] (also called mini-charges[2]) in quick succession. Traveling at a high speed, the rockets release a powerful explosion upon impact with the target. This explosion is powerful enough to damage, but not destroy, Protosteel.[18] Toa can also use them to channel their Elemental Powers.[19][20] The mini-rockets do not explode if thrown.[21]

Cordak Blasters function both in water and in air. 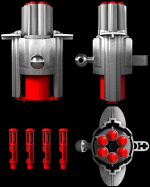