Books/Other Books is out of date.
You can help the wiki by updating it.

The BIONICLE: Collector's Sticker Book, published by Scholastic, is an activity book which contains stickers, information, checklists, and quizzes featuring BIONICLE characters from 2001 to mid-2003.

The sticker book opens with the The Legend of Mata Nui. It then moves on to a brief description of the Toa Nuva which includes stickers of their Mata and Nuva forms, which are meant to be placed on black and white images of the Mata and Nuva forms. Toa Takanuva's character description is then shown; complete with a small trivia section on the Toa. The book moves on to the Turaga, and gives descriptions of them with stickers and trivia. There is also information, stickers, and trivia on the Matoran, the Rahi, the Bohrok and Bohrok Va, the Bohrok-Kal, Teridax, and the Rahkshi. Following that there is a twenty question quiz based on the information from the book. After that there is a Kanohi and Krana Collectors Checklist which includes a picture, the name, the different colors, their powers, and their wearers. Then comes the "Beware the Infected Kanohi" section from The Chronicles of Takua, and finally a message that states the future (2004) would bring new heroes, new villains and a new story.

The BIONICLE Adventures Sampler was a 2004 publication included as part of the Special Edition Ta-Metru Collector Pack. The book itself is 70 pages, consisting of the prologue and first chapter of each of the first four Adventures novels. It has an ISBN of 0439734606.

The BIONICLE Annual is a hardcover activity and storyline book. It includes multiple activities, such as board games, quizzes, maps, and activities, as well as a timeline featuring story info up to mid-2006. The book also features the complete Tale of the Toa. There is also a special Kanoka Club code featured. On the back of the book, a picture of the Toa Nuva can be found. BIONICLE Annual was published by HarperCollins Children's Books.

BIONICLE: Guard the Secret is an activity book released in several countries by HarperCollins Children's Books. The book provides a brief synopsis and secrets of the Quest for the Mask of Life saga. On each page there are quizzes to test the reader's knowledge of Voya Nui. Throughout the book are other activities, including coloring, drawing, and tests. In addition, the book includes an exclusive Kanoka Club code.

BIONICLE: Facts and Figures is an activity book released in 2006. 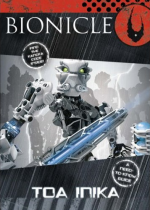 The Toa Inika Mini Guide is a miniature guide book released on 4 December 2006 which is available to European countries. It contains sixty-four pages. The book essentially provides biographies of all the Toa Inika, including the origins of their skills, tactics and favorite sayings. Pocket-sized for on the go, it also includes exclusive Kanoka Club points.

The Voya Nui Mini Guide is a miniature guide book released in December 4, 2006 and is available to the European countries. The book contains information about Voya Nui and other locations, and it also included the first appearance of the Cord.

The Matoran Mini Guide is a miniature guide book released on December 4, 2006 and is available to the European countries.

The book was created as a pocket reference for the Matoran of Voya Nui. After a brief introduction, the book briefly summarizes Matoran life on Metru Nui and Mata Nui. Next is a Matoran alphabet, the history of Voya Nui, descriptions of life on Voya Nui, an explanation of the Piraka's arrival, and a page with pictures of members of the Voya Nui Resistance Team. After this are six-page descriptions of each member of the Matoran Resistance (excluding Axonn), including their weapons, characteristics, and a summary of their roles in Island of Doom. Lastly, there is a quiz and a silhouette/Matoran matching game, as well as a picture of the Resistance, with the caption "The Battle Continues...". The book was published by HarperCollins Children's Books.

The Piraka Mini Guide is a miniature guide book which was released in European countries during 2006. It contains statistics, information, and trivia relating to the Piraka. It also includes Kanoka Club points. 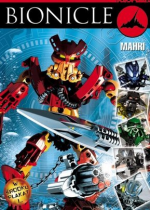 BIONICLE: Storyline Background (BIONICLE 故事情節) is a promotional booklet released in Hong Kong. The booklet contains summaries of the BIONICLE storyline from 2001 to 2008 with additional information on the 2008 Phantoka sets and a special preview of the Mistika sets.

The booklet could be obtained for free at the Causeway Bay SOGO and local Toys "R" Us stores in Hong Kong. 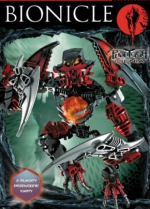 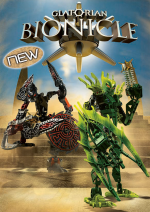 The Glatorian Mini Guide is a fourteen page miniature book released in Sweden, Denmark, Finland, Norway and Belgium for free. It contains information about Bara Magna and its inhabitants, a short description of the BIONICLE Action Figure Game, a maze in the shape of the Skrall's Seal, as well as an excerpt of Sands of Bara Magna. The last page advertises a contest to write an ending to the comic for a chance to win each of the Glatorian sets.

The BIONICLE: Glatorian books are a series of miniature books published in Poland by AMEET. Additionally, the first four instalments were translated and published in Portugal by Edições ASA.

Each installment features background information on Bara Magna, a reprinted Glatorian comic, and a chapter of "The Crossing", an original prose story written for the series by Greg Farshtey.

Quest for the Masks of Power

Quests for the Masks of Power is an activity book featured in BIONICLE's second generation and contains a special bonus mask (Ekimu's Protector Mask). The book is written by AMEET, and published by Scholastic, and was released on November 24th, 2015.