"We're safe. But where have they gone! It seems too quiet, almost."
"Maybe they gave up and went home."
"Not Pahrak. When they decide to solve a problem, they don't stop until they have found a solution. We'll see them again, I wager."
— Hewkii, Macku, and Jaller, Bohrok Online Animations

The Attack on Ga-Koro was a battle in which the Pahrak attempted to "clean" Naho Bay of Ga-Koro, while the Matoran attempted to drive the Bohrok off.

The Ga-Matoran had prepared for the eventual Bohrok attacks by cutting off the stone gate to the village and surrounding the village with sharpened bamboo poles.

Jaller and Takua came to Ga-Koro to help in the defenses against the Bohrok which would be sure to come to Ga-Koro, and showed the Ga-Matoran Nuparu's invention, the Boxor, to help in the defense. However, the meeting was cut short when Kotu informed Turaga Nokama that Onewa and the Po-Matoran were coming to Ga-Koro to take refuge from the Tahnok swarms. Onewa noted that it was just as bad there. The decision was made to dismantle the bridge leading to Ga-Koro, but the Bohrok continued to fight, destroying the gate, and sending a boulder flying at Macku. Hewkii intervened and saved her from the rock with a Fishing Staff. The rock then fell, and destroyed the rest of the bridge. The attacks stopped, and the Matoran enjoyed a moment of peace.

Later during the night, the Bohrok destroyed the Kanohi Kaukau statue on Naho Falls, and used it as a bridge to Ga-Koro. As the sun started rising, the Ga-Koro Guard found themselves unable to hold off the Bohrok, and even Boxor were useless, as they were simply thrown into the bay, their pilots needing to be rescued by the Ga-Matoran. Jaller and Takua were cut off from the rest of the Matoran, but Takua told Jaller to grab one of the bamboo poles while Takua was on it, and fling him onto the pad with the rest of the Matoran. As they made their final stand, however, the Ga-Suva located in the city, suddenly unleashed a beam of energy which struck each Pahrak present. The villagers took note of the appearance from the Nuva Symbol then hovering above the Suva, and all the Bohrok around the island were then deactivated as a result of the Bahrag's imprisonment. 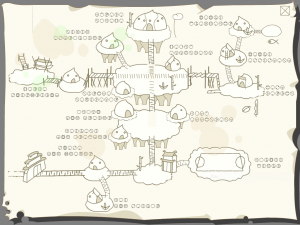 A Map of Ga-Koro after it was rebuilt

When the Bohrok were defeated, the Matoran dug pits and dumped the Krana into them, sealing the top with rocks with warning signs carved on them. The Matoran used the deactivated and reprogrammed Bohrok to help rebuild their village. As a result of the battle, Nuparu started thinking of ways to adapt the Boxor for aquatic battle. Hewkii had also, during the battle, inspired a new form of Koli using Ga-Matoran Fishing Staffs. Jaller, proud that his work was done, planned to return to Ta-Koro, but decided to stay awhile after Hahli placed a flower on his mask.

The statue at Naho Falls was reconstructed, this time in the image of a Kanohi Kaukau Nuva. Ga-Koro was rebuilt into a slightly more elaborate structure, and placed further into the water. The gate to the village was also reconstructed and moved from the shore.